The Woman In Black

Now it is fair to say that the horror genre has not been that fantastic over the last couple of years and 2012 has been another disappointing year for this genre.

There have been a couple of movies to get excited about but the bad sadly really did out weight the good. So we take a look back at some of the horror films that hit the big screen over the past twelve months.

Now The Woman In Black was one of the early 2012 movies that I really was looking forward to as I was keen to see Daniel Radcliffe shake off the role of Harry Potter and take a on a brand new challenge.

And boy did he do just that as he took on the role of Arthur Kipps in the adaptation of the Susan Hill as he delivered a performance that was different to anything else we had seen him in.

He really does carry this movie; the middle section where it's just him in the house with no other actors to feed off is quite brilliant.

But what is so great about this movie is The Woman In Black is a real menace and a threat - something that she doesn't really have in the book; or it's something that is glossed over.

She is a terrifying figure who is haunting the locals by having a hand in the deaths of their children - and idea that strangely isn't explored in the original story.

The Woman In Black was a movie that full of chills and thrills and was suspenseful and tension filled from start to finish. Not only was it one of the best horror movies but it was also one of the best movies of 2012.

Sinister was another horror highlight as Ethan Hawke returned to the big screen while Scott Derrickson was in the director’s chair.

Sinister is a movie that really has you jumping out of your seat as it notches up the tension frame by frame.

This is a film that hooked you from the opening scene and really did hold you attention right up until the closing credits - as well as scaring the shit out of you along the way.

But with this genre it was pretty much all downhill from there as the movies have not really lived up to expectation.

The Cabin In The Woods was one of the major horror disappointments of the year with one of the craziest and awful twists that I have seen this year.

The first hour creates quite an atmosphere as you are not sure what is going on as a group of friends are unaware they are under surveillance when they visit a cabin for the weekend.

The director mixes tension and unease with some laugh out loud comedy but once we have the big reveal all that just melts away - which is an incredible shame as all of the good work of the first hour just goes to waste.

The Devil Inside was another pile of old rubbish as it was another exorcism movie - and this is something that I am bored of seeing on the big screen if I am being honest.

If you have seen one exorcism movie then you have seen them all as they all walk a similar line and they are all a major let down.

To say that I am getting a little bored with the documentary style filmed movies is a little of an understatement, it's what every horror movie seems to be doing at the moment and it is getting somewhat tiresome.

Directors hope to capture that fresh feeling of The Blair Witch Project and, let’s face it that is never going to happen as it has been done to death.

The Devil Inside was a dull mess from start to finish and if you are lucky enough to have not seen this movie yet then it is best if you keep it that way.

The first Paranormal Activity was a load of old dross so how we have come to have the fourth movie hit the big screen this year is anyone’s guess.

But sadly this is not a horror franchise that they have not nipped in the bud and we have had to suffer dull instalment.

To say that this is a slow burner is a little bit of an understatement as nothing really happens for the first hour expect the fact that Alex has sent up cameras all over her house to watch these 'strange' happenings.

Without a doubt the last half an hour is the most entertaining but by the time it arrives you have lost the will to live and couldn’t two hoots who snuffs it or not.

But things could be looking up for this genre into 2013 as the likes of Carrie and Mama are set for release - fingers crossed it is an improvement on 2012.

Tagged in The Woman in Black The Cabin In The Woods 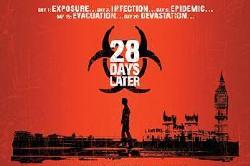