Bruce Willis returns to the big screen this week with his new movie Lay The Favourite, a comedy project with an all star cast.

The movie is based on the memoir by Beth Raymer of the same name and sees Stephen Frears back in the director's chair for the first time since Tamara Drewe.

And to celebrate the release of the movie we have an exclusive clip for you to enjoy ahead of the film's release tomorrow:

In the sports gambling Mecca of Las Vegas, an exuberant ex-private dancer Beth (Rebecca Hall) arrives in search of her ultimate dream = to become a cocktail waitress.

Fate leads her to Dink (Bruce Willis), a charming, old-school gambler who seeing beyond the ditzy façade, takes a shine to Beth, recruiting her as his good luck charm, a sharp contrast to his jinx... wife Tulip!

But as luck would have it, the odds are not in Dink’s favour. As he enters a losing streak and Beth’s crush on him becomes all too apparent, he is forced to fire her.

Devastated and heart-broken, she flees to New York to the ever dependable Jeremy (Joshua Jackson), working for flamboyant and illegal bookie Rosie (Vince Vaughn) who takes her to the Caribbean island of Curacao to oversee his expanding empire.

With Rosie and his operations becoming ever more out of control, Beth becomes increasing conscious of how precarious her situation is and hesitantly enlists the help of Dink and Tulip.

The stakes are high and as the friends converge, they must figure out a way to divert the potentially dangerous situation that lies ahead for all of them. Every decision counts. 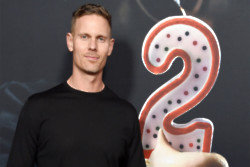