With the likes of Chronicle and John Carter having already been released it looks like it is going to be a pretty decent year for sci-fi movies - particularly when you see what is on the horizon.

This week sees Guy Pearce return to the big screen with his science fiction effort Lockout. So to celebrate the release of the movie we take a look at some of the sci-fi movies that you cannot afford to miss this year.

There is a real Escape From New York feel to Lockout as Luc Besson as co-written the script as well as produced the movie.

James Mather & Stephen St. Leger are at the helm for the movie while Maggie Grace joins Pearce on the cast list.

Prometheus is one of the most anticipated movies of the year as Ridley Scott returns to the sci-fi genre for the first time in over thirty years.

I have had the chance to see some early footage from the movie and believe me when I tell you that it is going to be one hell of a ride - not to mention that from a visual perspective it looks stunning.

The film takes a team of scientists and explorers on a thrilling journey that will test their physical and mental limits and strand them on a distant world, where they will discover the answers to our most profound questions and to life's ultimate mystery.

And as you would imagine a Scott movie brings a great cast and Noomi Rapace, Michael Fassbender, Charlize Theron, Idris Elba and Pearce are all on board.

This is one of the most secretive projects of the year and I have got all my fingers crossed that it lives up to everyone's expectations.

It has been a decade since the Men In Black last graced the big screen but this summer Will Smith and Tommy Lee Jones are back for a third instalment of the hit franchise.

Agents J & K are back, this is the first big screen outing for Smith since Seven Pounds,   while Barry Sonnenfeld returns to the director's chair.

Agent J travels in time to MIB's early years in the 1960s, to stop an alien from assassinating his friend Agent K and changing history.

Men In Black III is set to be the most blockbusterish sci-fi movie that will hit the big screen this year.

Josh Brolin, Emma Thompson and Alice Eve are just a handful of the new faces we will be seeing in the franchise this time around.

Men In Black III is released 25th May

Colin Farrell is looking to become a bit of an action hero this summer as he stars in the remake of Total Recall.

The Len Wiseman directed movie is an updated take on the 1990 movie, which was an adaptation of the short story by Philip K. Dick.

The first trailer for the movie promised much as it is set to be action packed and it looks like they have created a fantastic looking futuristic world.

As the nation states Euromerica and New Shanghai vie for supremacy, a factory worker (Farrell) begins to suspect that he's a spy, though he is unaware which side of the fight he's on.

Cloud Atlas promises to be one of the most exciting sci-fi movies of the year as the David Mitchell novel of the same name is adapted for the big screen.

A forty minute preview of the film that was shown earlier this year was met well but this movie does look set to be rather complicated.

Tim Hanks, Hugo Weaving, Halle Berry, Keith David, Jim Sturgess and Hugh Grant are all set to star and the movie follows six stories set in a different time and place become intricately related to each other.

Other sci-fi projects to watch out for this year include Looper, which sees Bruce Willis team up with Joseph Gordon Levitt and Gravity, the new movie from Alfonso Cuarón. 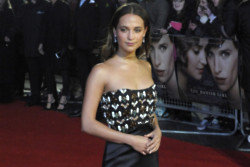