Matthew Chapman returned to the director's chair for the first time since 1988 for The Ledge, which will be released on DVD & Blu-Ray next week.

I caught up with him to talk about the movie, working with Liv Tyler & Patrick Wilson and what lies ahead.

- The Ledge is about to be released on DVD so for anyone who hasn't seen the movie yet can you tell me a little bit about it?

The film tells the story of an affair between an atheist and the wife of a fundamentalist which leads to fatal consequences.

It leads to the main guy in the film standing on a ledge about to kill himself, which is really where the film starts and then you flash back and you realise that he’s not there by choice - that he doesn’t want to jump. But if he doesn’t jump, someone he loves is going to die, so he has a dilemma.

- You last directed a movie back in 1988, Heart of Midnight, so what made you want to get back in the director's chair?

I stopped directing because my daughter was born and I didn’t want to miss watching her grow-up. When you direct a film, you are removed from your family physically for a long period of time and kind of mentally and emotionally, you’re removed for about a year and I thought, if I miss a year of my daughter growing up, I’ll really regret it.

I started working as a screenwriter in Hollywood, and then I wrote two books. Then I got involved in a big political foundation that I started, which was trying to get the presidential candidates to talk about science as well as faith.

Then, all of a sudden, twenty years had gone by. It wasn’t that I really intended it to be that long - I thought it would be ten years. And then I thought ‘wow, it would be good to go back to it’.

- You also penned the screenplay as well as directed the movie so where did the idea for the movie come from?

It came from my travels in the mid-west and the south of America. Both my books and so many articles I’ve written have been about the attempt by religious forces in America to get creationism taught in American schools thereby robbing kids of a decent science education.

I met a lot of religious fundamentalist on my travels and I became fascinated by them, and I know them, and I have this curious ability to remain friends with somebody whose ideas I really dislike. I actually spoke the other day to the person upon whom I based Patrick Wilson’s character (the fundamentalist) and it’s almost impossible to convey to someone who doesn’t live here how incredibly religious and primitive America is.

A simple statistic is almost 50% of Americans believe in Creationism and don’t believe in Evolution. I think that, religiously, Americans are about 500 years behind the times compared to Europe.

- The movie uses a flashback structure so I was wondering why you chose to tell the story this way?

I wanted the film to appeal to two separate but links audiences. First of all, I wanted it to appeal to women because I feel that women are more oppressed by religion than any group, except perhaps gay people, and of course there’s also a gay character in the film.

It always amazes me that women are so religious when religion always treats them so badly. I wanted a film that had a suspenseful, highly emotional story about relationships.

A story about love and duty, passion and lust, and all of the classic ingredients of a chick flick. On a second level, I wanted a film that guys would go and see because it IS a suspense thriller. The guy is standing on the ledge very early on and he’s going to have to jump off it in one hour. So, you kind of go ‘oh my god, why?!’ and the more you learn, the more suspenseful it becomes.

You realise that the forces that might push him off this ledge are really strong, and the people involved are people that he really cares about. It works on that level.

It was selected for Sundance Festival and the film was shown six or seven times. I had one person walk out because it was just so suspenseful. You want to see what’s going to happen. The flashback structure enabled me in the middle to talk about issues that I found important.

- The movie looks at religious beliefs both Christian and atheist. So without giving away too much of the end, how do the events in the film reflect your own feelings towards religion?

I’m an atheist and I talk about this. One of the things I always say is that for a woman to believe in God is like a freed slave still living on the plantation.

I cannot understand why you have Muslim women dressing the way they do when they have a choice not to.

- Liv Tyler and Patrick Wilson are just two of the names on the cast list so can you tell me a little bit about the casting process and what you were looking for in your leading actors?

Liv was actually the first actor that I saw and I just thought that she had a great quality. Now that she’s older, she’s way more interesting than when she was younger - she looks more interesting and is way more beautiful to me.

She has this face that conveys an inner suffering that I really loved and a beauty in that suffering. She couldn’t do the film originally because she was in the middle of her divorce so next in my path was Charlie Hunnam.

Patrick Wilson was somebody who I wanted from the very beginning. I sent him the script very early on but his agent blocked it. Right at the end, I called Liv again and she said ‘yes, I’ll do it’ about a week before I started shooting, so I got everything I wanted in the end. It was great.

- So how did you find working with them? Are you a quite hands on director who give actors strong direction or are you happy to sit back and see where they take the character?

It was a delight. All of them are fantastic. I had taken a lot of trouble to write the script in a particular way and I didn’t allow the actors to screw around with the lines or improvise a lot.

I did change things for Liv a bit because she asked me to. She’d say ‘this line here - I can do it just with a look. I don’t need the dialogue’ and she was right. I think that’s what makes her performance so mesmerizing.

I’ve had women come up to me after a screening in tears and say ‘I have lived a life like Liv Tyler in this film and she so expresses the feeling that you get when you manage to escape a relationship like that’.

- And what sort of challenges did making this movie pose for you as a director?

It’s very hard to get an independent movie made even if it’s a movie just about a guy meets a girl and they’re both commitment phobic but they come back together at the end. If you have a movie like this which has some very provocative opinions in it, it’s really hard.

For example, all of the stuff on the ledge I shot in two days, whereas normally we’d take about three weeks up there. I had a good crew and I think it’s a lovely looking movie and people talk about it being beautiful.

- Finally what's coming up for you both as a director and a scriptwriter?

As a scriptwriter, I just finished writing a screenplay about the gay American poet Elizabeth Bishop and an affair she had with a woman in Brazil.

For directing, I have a keen romance with a very strong young female character which is set against fifteenth century Florence about a conflict with art - it’s a love story set against a religious conflict.

The Ledge is released on DVD & Blu-Ray 16th March 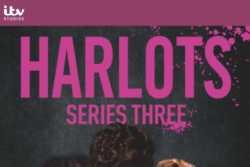