We love a bit of Jason Statham here at FemaleFirst and he is back on the big screen later this year.

This is the first film for Statham since The Expendables 2 last summer and it sees him doing what he does best... kicking some ass!!

And we have a couple of great clips from the movie for you to check out to wet your appetite:

Parker sees Statham team up with Jennifer Lopez who we also haven't seen on the big screen since last summer.

Taylor Hackford returns to the director's chair for Parker and he has been behind movies such as Ray, Proof of Life and The Devil's Advocate. 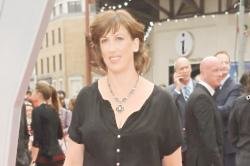