Rock Of Ages looks set to be one of the most fun filled movies of the summer and the stars of the show were on the red carpet in London earlier this week to promote the movie.

Take a look at this red carpet video which sees the stars talk about the movie and their characters:

Rock Of Ages sees Adam Shankman back in the director's chair and he brought us Hairspray five summers ago.

This time around the singing ability of Tom Cruise is on display as takes on the role of rocker Stacee Jaxx and he will be belting out a whole host of great rock and roll tracks.

Julianne Hough is back in another music fuelled project after starring in Burlesque and Footloose while Diego Boneta makes his feature film debut.

The trio are joined by an all star cast that includes Paul Giamatti, Catherine Zeta Jones, Alec Baldwin and Russell Brand.

Rock of Ages tells the story of small town girl Sherrie and city boy Drew, who meet on the Sunset Strip while pursuing their Hollywood dreams. 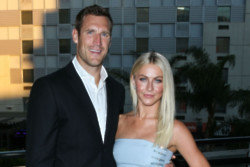 Julianne Hough and Brooks Laich getting back together?