Don Cheadle is one of the most exciting and versatile actors around and we have seen him tackle a wide range of roles over the years. 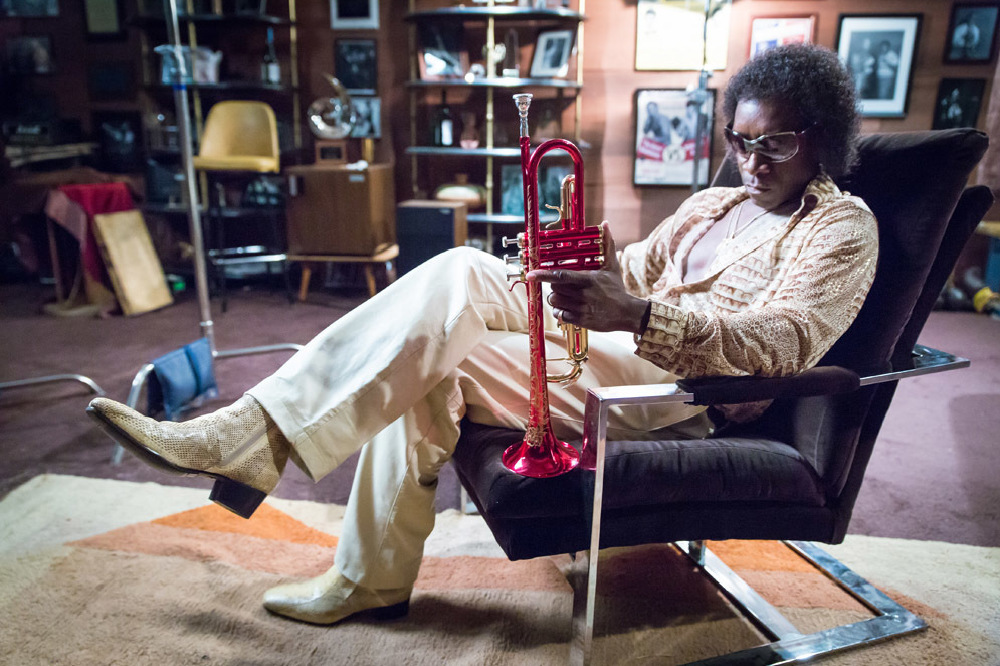 Don Cheadle in Miles Ahead

During his career, we have seen him tackle hard-hitting drama, biopic projects and big blockbusters films. He has also found success in television.

To celebrate the release of Miles Ahead, which sees Cheadle makes his feature film directorial debut, we take a look back at some of the best role of the actor's career so far.

Miles Davis was a huge film project for Cheadle who wrote, directed and took on the central role of Miles Davis in the music biopic.

I have always been a big fan of Cheadle as an actor and he delivers another terrific performance in the central role. Not only does he get under his skin and explores this character, he also delivers a performance that pays homage to this musical great.

There's something captivating and truly magnetic about Cheadle's performance as he shows the many sides of this fascinating character. Cheadle brilliantly exhibits the complex and mercurial character of musical genius that plagued Davis throughout his career.

It is hard to believe that it is only this year that Cheadle has made the leap into the feature film director's chair - I thought he would have done it sooner. But I am excited to see him develop as a filmmaker.

Hard to believe, but Boogie Nights is a movie that is almost twenty years old - yes, it was released back in 1997 and was the second feature film for director Paul Thomas Anderson.

While Buck is at times a morally dubious character, Cheadle plays him in a way that you cannot help but like and root for. He is a man who just wants to create a better life for himself and you cannot help but get on board with that as an audience member.

Boogie Nights remains one of Anderson's best movies and is a film that is grounded in great storytelling and well-crafted and interesting characters.

The movie was met with acclaim upon release and went on to be nominated for three Oscars, including Best Original Screenplay.

Cheadle has worked with some fantastic directors during his career and in 2000 he teamed up with Steven Soderbergh for the first time for Traffic.

Cheadle takes on a far different kind of role as Montel Gordon, a key player in one of the films three subplots displaying the varying perspectives of the illegal drug trade.

Montel Gordon is an undercover cop for the office of the Drug Enforcement Agency of San Diego. When Gordon and his partner arrest a major distributor for drug lord Carl Ayala, Eduardo Ruiz, Ruiz agrees to testify against Ayala in what will be a monumental takedown for the DEA. Ayala's wife, interferes, and in the process has Gordon's partner, Ray Castro killed. Gordon is furious and will stop at nothing. Though he does is not successful in arresting Ayala at the film's climax, a bug plant leaves room for hope.

Traffic is an ambitious and intricate that weaves three difference stories and a whole host of characters together. The movie explores the world of drug trafficking, the different players in that world and the impact that that world has on them and those around them.

All of the cast give terrific and gritty performances and this was another movie that really did help cement Cheadle as an exciting acting talent.

Traffic was met with critical acclaim upon release and went on to pick up ten Oscar nominations, including Best Picture.

Cheadle was part of another ensemble cast list in 2005 when he starred alongside Thandie Newton, Ryan Phillipe, Sandra Bullock, and Matt Dillon in Crash, which was written and directed by Paul Haggis.

Crash takes place in the diverse metropolis of Los Angeles and challenges audiences to confront their prejudices. Lives combust when a Brentwood housewife and her district attorney husband, a Persian shopkeeper, two cops, a pair of carjackers and a Korean couple all converge.

Crash is a movie that tackles themes of race, gender and how we all capable of prejudice and making assumptions about people based on the colour of their skin or their ethnicity.

Cheadle takes on the role of Det Waters, a plain clothes cop who is having an affair with a Latina colleague. At the same time, he is struggling with his sick mother and a younger brother who has gone off the rails and is on the wrong side of the law.

Many of the characters are morally grey and cannot see their prejudices and the likes of Cheadle, Dillon, and Bullock give excellent performances.

Haggis seamlessly weaved together different storylines of a string of characters and Crash is a morality piece that really does explore some uncomfortable themes.

Crash was a huge critical and commercial success upon release and went on to win the Best Picture Oscar - beating the much favoured Brokeback Mountain.

It was 2004 when Cheadle delivered the performance of his career in Hotel Rwanda.

The movie was based on the Rwandan Genocide of 1994 and saw Cheadle take on the real-life role of hotelier Paul Rusesabagina, who saved the lives of thousands of refugees by giving them shelter in the Hôtel des Mille Collines when civil war erupted.

Directed by Terry George, this is a movie that explores themes of civil war, mass genocide, and political corruption in what is a very important and powerful movie.

Hotel Rwanda is a sobering and hard-hitting movie that tackles themes that are quite difficult to explore and to watch. For me, it remains Cheadle's greatest big screen performance and he deserved all of the acclaim that came his way.

Cheadle really does deliver a restrained but knockout performance as he captures the bravery and the anger of the central character. It is an understated performance because it is about human decency rather than Rusesabagina being depicted as a hero.

Rusesabagina really is an everyman and Cheadle really does capture that so perfectly. It is a wonderful performance and a movie that will stay with you long after the credits have rolled.

The movie and Cheadle's performance was met with critical acclaim and he went on to pick up his first Best Actor Oscar nomination; he lost out to Jamie Foxx for his performance in Ray.

Cheadle joined the Iron Man franchise back in 2010 as he took over the role of Col. James 'Rhodey' Rhodes for the first time. It is a role that he reprised in a much larger role in Iron Man 3 three years later.

Since then, we have seen Cheadle appear outside of the Iron Man franchise with Avengers: Age of Ultron in 2014 and Captain America: Civil War earlier this year.

This is the first time that we have really seen Cheadle in a blockbuster role and he has become a major player in the MCU. I am a big fan of the character of Rhodes and Cheadle plays his wonderfully.

Cheadle has a fantastic chemistry with Robert Downey Jr - as Tony Stark - and this relationship has been at the heart of the Iron Man franchise. They are great actors and the banter between them is just fantastic and provides some of the lighter moments - especially in Iron Man 3.

And Cheadle has enjoyed huge success as part of the MCU with Iron Man 3, Avengers: Age of Ultron, and Captain America: Civil War all grossing over $1 billion at the global box office.

Miles Ahead is out on digital platforms now and on Blu-ray and DVD from 22nd August 2016, courtesy of Icon Film Distribution.