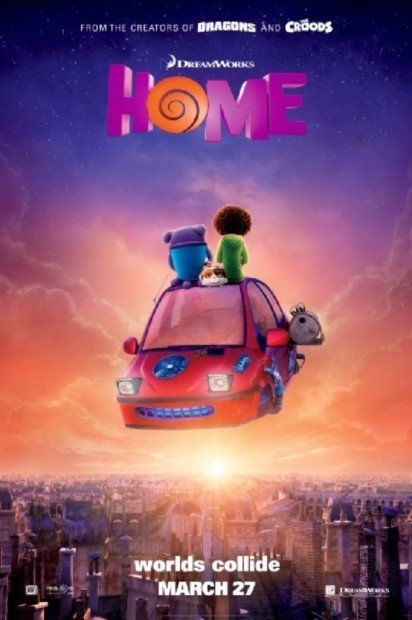 Dreamworks have delivered some terrific movies in recent years, and Home is set to be another unmissable gem that will be hitting the big screen in 2015.

Home is based on the children’s book The True Meaning of Smekday by Adam Rex, and sees Tim Johnson in the director’s chair. Johnson is no stranger to the animation genre with the likes of Antz, Over the Hedge and Sinbad: Legend of the Seven Seas already under his belt.

A brand new full-length trailer has been released for the film, and it really does look like Home is going to be action packed and a lot of fun. Yahoo! Movies have released the new trailer, and we have it for you to take a look at:

As we have come to expect, a terrific voice cast has been assembled for Home, as Rihanna, Jim Parsons, Jennifer Lopez, Matt Jones, and Steve Martin are all on board.

When Earth is taken over by the overly confident Boov, an alien race in search of a new place to call home, all humans are promptly relocated, while all Boov get busy reorganizing the planet.

But when one resourceful girl, Tip, (Rihanna) manages to avoid capture, she finds herself the accidental accomplice of a banished Boov named Oh (Jim Parsons).

The two fugitives realize there’s a lot more at stake than intergalactic relations as they embark on the road trip of a lifetime.

The Croods, How To Train Your Dragon, and Rise of the Guardians have been some of the standout recent movies from DreamWorks, and Home is another animation movie that I will not be missing next year.