Kristen Wiig is passionate about one of her latest projects, Downsizing, and that's clear in our exclusive interview with the star!

With brilliant new movie Downsizing coming to home release a little later this month, we got our hands on an exclusive interview with one of its leading stars – Kristen Wiig! Read on to find out what she thinks about the film, as well as working with the likes of Matt Damon and Alexander Payne. 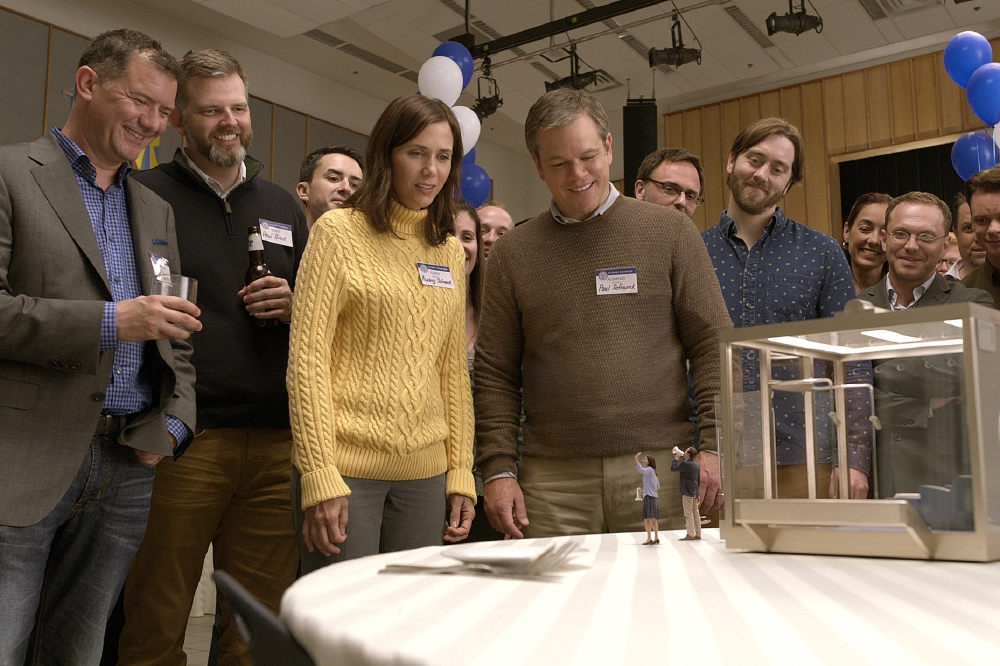 What is Downsizing about?

I guess in a greater sense it talks about where we are in the world and solutions to possibly keeping the earth the way it is and preventing global warming, and all of these things, by having people shrink down… And in the world of this movie that’s happened. And we now have the choice of being able to shrink ourselves and live in this place called Leisure Land, which is basically a whole world created for these newly small people making less of an impact on the environment. And a lot of people are doing it.

My character is Audrey, and I feel like when you meet her she’s probably not at the top of her game. She’s not too happy. She and Paul, played by Matt [Damon], are married and don’t really have a lot going for them right now. They’re not really living their dream at all. I wouldn’t say they’re super happy, and [they’re] looking for a change and something to sort of shake it up. And downsizing seems like the right answer, especially because money there is – I think it’s like, one dollar here is worth a thousand dollars in Leisure Land. So that’s a big temptation for them.

What’s going on in the relationship?

I feel like Audrey wants something from Paul that she knows she’ll never get. I think there’s a part of her that doesn’t want to be alone, and likes her life a little more with a partner. I do think she loves Paul. But I don’t think either one of them would describe each other as their soulmate by any means.

How do they get led to check this [downsizing] out?

I think in the beginning Paul is way more into the idea than Audrey is. And ‘cause she’s very close with her family and her friends. And there is that element of, if you downsize, you think of these things. Like, oh, I won’t be able to hug my father again. Or I won’t be able to sit with my girlfriends I have [had] for 20 years. But I think through seeing some of the people that have done it and then looking into Leisure Land and seeing how beautiful it is and the homes are huge. And there’s, you know, there’s pools. There’s sport centres. It just seems like a little utopia. I think she comes around, but Paul’s definitely into the idea way more than Audrey in the beginning.

What happens when they decide to go through with it?

Well, when Paul wakes up he gets a phone call from his wife. And on the other end of the line is me, Audrey, who is full-sized and didn’t go through with it. And she’s crying and it’s a very tough thing. I think she really wanted to go through with it. And, you know, when you have the procedure done, the women are separate from the men. So who knows when she decided. She had already shaved her head, and one of her eyebrows were gone. And she had to give him the news she didn’t do it.

How was it getting into the shaved look?

Yeah well, when I first read it I was kind of excited ‘cause’ I thought, ooh, I have to shave my head for a movie. That’ll be kind of cool. But it was a bald cap. I didn’t shave my head, which is really weird too when you have such a realistic bald cap. And one of my eyebrows was removed. And looking in the mirror was just so strange because it was like bald, fully bald.

I just like how I was dressed in clothes that I think I stole from the place, like someone else’s sweatshirt and the hospital gown. And she just panicked at the last minute and she wanted to get out of there.

What drew you to this film?

Well, it was such a… I mean, it’s like a double whammy. It was Alexander [Payne] who I’ve always wanted to work with. And Matt, who I’ve always wanted to work with. We were in The Martian together, but we didn’t have any scenes together. So I felt a little robbed on that one. I mean the script I think is so funny and weird and uncomfortable and sad. I just really, really loved it. And I just love Alexander’s work. And to get to work with Matt was just amazing.

What was your reaction to the script?

I just thought it was such a great idea. And the characters in it were so interesting because there’s probably a lot of emotional torment that goes along with having this other world of downsized people. And I just love the way that they wrote it. And I thought it was really smart and really funny. I just loved it.

What does Matt bring to his role?

Paul’s character in the beginning is so beaten down, a little bit, because of my character, and sad. He doesn’t really stand up for himself that much. He feels very much like he takes care of other people. What Matt is bringing to it is just through his looks and his wardrobe and the way he’s carrying himself. I feel so bad most of the time we’re doing scenes. I’m like sorry. I mean, he’s just incredible. I mean he’s one of the great actors of our time. And I think that to bring such sincerity to this weird, crazy, funny movie is like a real talent.

How is this an Alexander Payne film?

Oh gosh, that’s a really good question. I think what makes it an Alexander Payne film is that it’s not like all of the other Alexander Payne films. Because all of his movies are so different. I mean you know, they’re directed by him and sometimes written or co-written by him. The characters are just… it sounds so cliché to say the characters are so specific. And everything about it is… has been thought about, the sets, the wardrobe, where people are in the background. It’s got this sort of underlying sadness underneath like really funny dialogue. And yeah, I think the thing that he does is kind of… it’s hard to describe. 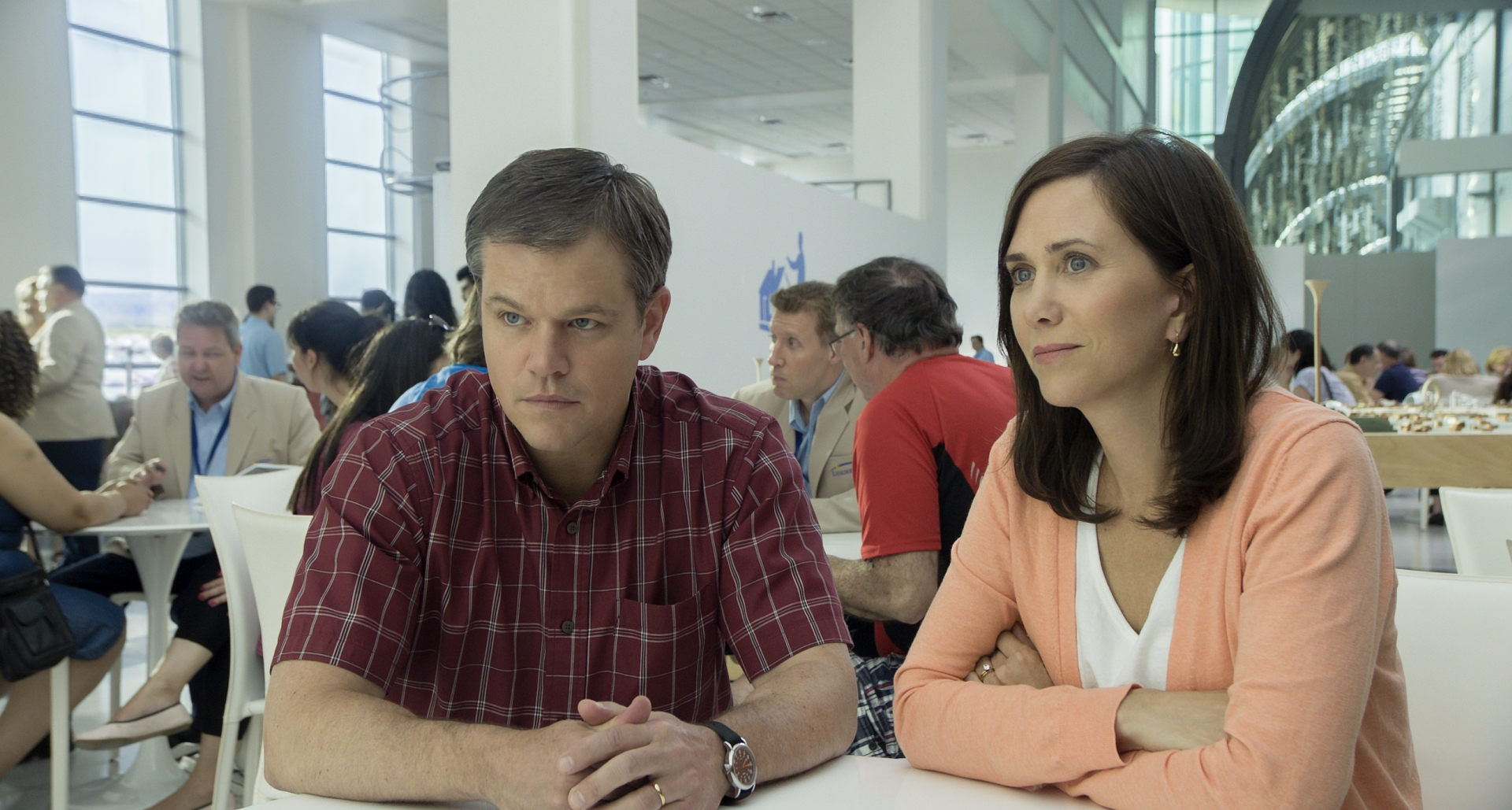 How does a grounded story take place in an absurdist world?

Well, it is an absurdist world. But it’s also, you ask yourself, well, what would you do? And could this happen? And it is rare that movies are about something that… it’s so crazy. But it also could kind of happen someday I guess. I mean, it would be really hard to shrink people. But you do think about it. It’s making everyone think about it, like if they would do it. And if you’re gonna have such a strange world, it’s a nice sort of contradiction to have the story really be about the people and relationships, which is something we can all relate to.

What is the power of satire?

But when it’s made funny we kinda let ourselves laugh at it. Then we realise we can laugh at a lot of serious things in life, I guess. Did that make any sense? Okay. As I was talking I was like I’m not really sure what I’m saying. But just get to the end. (laughs)

What do you hope audiences get from this?

There’s a lot. I mean, I do think there’s a lack of movies like this in the world. And I love that Paramount took a chance with something like this. As someone in the business I hope that people won’t see movies like this as such a big risk. And we don’t have to keep telling the same stories and that we can do different things like this. ‘Cause I think people want to see it. I think it will make people question how they live in the world and how they treat the environment and the planet and each other. Also, just seeing one of Alexander’s great movies. And Matt, again, is so great. Everyone, like the cast that we’ve had in so far that I’ve seen has just been amazing.

Why is now the right time for this film?

Now is the right time for this film because now is when we’re making it. Yeah, it’s just the perfect time. I don’t know. I’m answering it in a very Zen way. But it’s the perfect time because it’s the time. And the time is now. It’s perfect. Mmm.