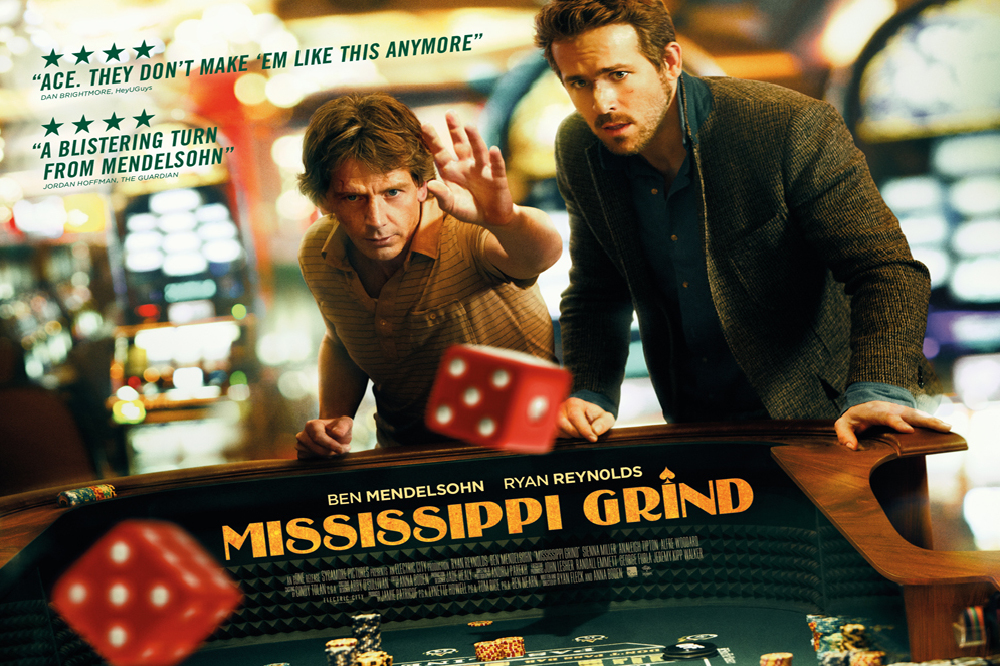 Ryan Fleck and Anna Boden reunite in the director's chair this week with Mississippi Grind, their first film together since It's Kind of a Funny Story back in 2011. This time around, the writers and directors mix road movie with addiction drama and team up with Ben Mendelsohn and Ryan Reynolds for the first time.

Gerry (Mendelsohn) is a talented, but struggling poker player about to be swallowed up by his unshakable gambling habit, when his luck begins to change after he meets the young, charismatic Curtis (Reynolds).

Gerry convinces his new lucky charm to hit the road with him, towards a legendary high stakes poker game in New Orleans. The highs and lows unveil the duo's true characters and motivations, and an undeniable bond forms between them.

I wasn't quite sure what to expect when I settled in to watch Mississippi Grind and what I got was a wonderful character study with two terrific central performances at its core.
Both Ben Mendelsohn and Ryan Reynolds are great in the roles of gamblers Gerry and Curtis and they make one hell of a fantastic film partnership. There is a genuine chemistry and spark between them and go on this great journey together.

Gerry and Curtis are two men who are struggling with their gambling addiction but this is a movie that is as much about friendship and redemption as it is about the power of an addiction problem. Mississippi Grind really does become a wonderful character study of two men who are trying to change their lives.

Mendelsohn, in particular, creates a character that you cannot help but feel sorry for. A string of poor choices and bad advice has seen his life go down a very different path - for the entire film you are truly rooting for him to get back on the straight and narrow.

Mississippi Grind sees Reynolds deliver one of his best performances since his stunning turn in Buried as he continues to show off very different sides to him as an actor. Not that long ago, Reynolds was very much a comedy actor but now, he has shown that he can tackle a wide range of genres and has given some impressive performances along the way.

Fleck and Boden have created a really gritty movie about a gambling addiction and yet, they have made a very human and relatable tale. The writing is top notch and it is the script and the character development that really carries this film forward.

They have created characters that are interesting and with great depth So often we see these kinds of addiction movies deliver 2D characters that all have a very similar story. Not here. Gerry and Curtis are men with flaws and vices and have far more layers that you would have ever expected... of course, they have been brought to life wonderfully by the talents of Mendelsohn and Reynolds.

For me, Mississippi Grind is one of the best buddy movies of the year and is a movie that really does have a lot of heart. But it's the performances of Mendelsohn and Reynolds that really elevate this movie further; they are well rounded, lovable losers that you cannot help but cheer on.

Mississippi Grind is out now.