Actress Evan Rachel Wood narrowly avoided a hospital visit after cutting her hand on the set of new movie The Wrestler, director Darren Aronofsky offered to superglue the bloody wound himself to avoid delaying the shoot.

She says, "I cut my finger throwing something at him (Rourke). I squeezed a can and sliced my finger open in the middle of the scene.

"I'm covered in blood and (Aronofsky) the director's going, 'Use it! Look at your hand! Keep going! Let's take some photos of that blood make sure ours is authentic.'

The Wrestler is currently riding on a wave of critical, commercial and award success after Wood's co-star Mickey Rourke won the Best Actor gong at the Golden Globes.

He is now a heavy favourite to repeat that success at the Oscars next month. 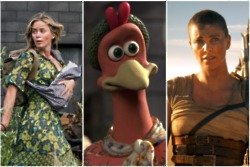