Jason Statham believes that the humour in The Expendables 2 has turned the movie into more than just an action flick.

The actor reprises the role of Lee Christmas in the Simon West directed film and he admits that he liked the humour in the script because it gave the film an added element.

Speaking with Den of Geek the actor said: "People get bored if you're just being the.. chap that just sort of kills all the bad guys. It just becomes very boring.

"People can really feel they relate to humour... I do, particularly the Brits [as well]... Thank god that Sly does too."

Statham teams up with Sylvester Stallone once again while Dolph Lundgren and Jet Li were also back.

There were bigger roles this time around for Bruce Willis and Arnold Schwarzenegger while Jean Claude Van Damme and Liam Hemsworth were two of the new faces.

There is already talk about a third film and names such as Clint Eastwood, Nicolas Cage and Harrison Ford are already being banded about.

The Expendables 2 is out now. 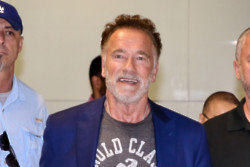