Jada Pinkett Smith wanted her husband Will Smith to star in 'Matrix' but he didn't see the vision like she did.

Jada Pinkett Smith wanted her husband Will Smith to take the 'Matrix' role. Jada Pinkett Smith and Will Smith

The 50-year-old actor was approached to play Neo in the 1999 sci-fi film but he famously turned it down, much to the disapproval of his wife as she tried to encourage him to go for it because she knew in her gut it would be "revolutionary."

Speaking to Entertainment Weekly, she said: "I knew it would be revolutionary. I was like, 'Will, you've got to do this movie!' He didn't fully get it, but I did."

Smith recently said he turned down the part because he wasn't happy with the pitch by the film's writers, Lana and Lilly Wachowski, but he still regrets the decision to this day after he saw Keanu Reeves play protagonist Neo in the film.

Speaking on his YouTube channel, he said: "All right this is one of them stories I'm not proud of but it's the truth. I did turn down Neo in 'The Matrix'.

"They came in and it was like they'd only down one movie, I think it was called 'Bound'. And they came in and they made a pitch for 'The Matrix'. As it turns out they're geniuses. But there's a fine line between genius and what I experienced in the meeting."

Mimicking the writers at the meeting, the 'Suicide Squad' star said: "So, dude, we're thinking like, imagine you're in a fight and then you, like, jump. Imagine if you could stop jumping in the middle of the jump. But then, people could see around you."

Looking unimpressed, Will admitted: "So I made 'Wild Wild West'."

The 'Men In Black' star has nothing but praise for Keanu's performance in the 1999 film and the sequels as well as Laurence Fishburne, who portrayed Morpheus.

He said: "I'm not proud of it, but ... Keanu [Reeves] was perfect. Laurence Fishburne was perfect."

Although Will missed his chance to play Neo, he joked that due to changes in casting if he had been in the film, he probably did fans a "favour".

He quipped: "If I had done it - because I'm black - then Morpheus wouldn't have been black because they were looking at Val Kilmer. 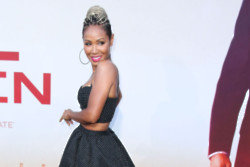 Jada Pinkett Smith: I never worry about being liked