R-Rated, romance or horror, we've got you covered!

The world of cinema is constantly evolving, with countless big screen releases coming to film fanatics every year, fleshing out a whole bunch of different genres that have helped build the foundations of Hollywood and beyond. February 2020 is no different, with a whole bunch of unique flicks making their way to audiences. Here are seven that we can’t wait to grab the popcorn and settle down in front of…

Birds of Prey (and the Fantabulous Emancipation of One Harley Quinn) – release date February 7th, 2020

Margot Robbie is back as Harley Quinn following her Suicide Squad debut, fronting the Birds of Prey in a movie that will bring together some of DC Comics’ most iconic female heroes, villains and everything in-between. The Worlds of DC universe has been a bit of a bumpy road when it comes to critical response, but for those who have had the opportunity to check out Birds of Prey in advance of its official release, it seems to have ticked all the right boxes. It’s gonna be very exciting to see a bunch of actors new to the world of DC join the ranks and perhaps set the stall for what the Worlds of DC universe can be in the future!

William Eubank sits in the director's chair for this thriller, which sees Kristen Stewart star alongside the likes of T.J. Miller, Vincent Cassel, John Gallagher Jr., Jessica Henwick and Gunner Wright. When a crew of underwater researchers are put in danger following an earthquake, which destroys their subterranean laboratory, it's a scramble for survival as they attempt to defy the odds and come out of the devastation with their lives still intact.

Following the huge success of the first Netflix original film, audiences will get to continue their journey alongside Lara Jean (Lana Condor) and Peter (Noah Centineo) who are now no longer pretending to be a couple, and instead are a fully-fledged partnership! With a whole bunch of exciting new firsts on the horizon, Lara Jean finds herself leaning on her friends more than ever before. When an unexpected recipient of her old love letters returns to her life however, Lara Jean must come to terms with the distinct possibility that she could be in love with two boys at once...

It’s been a long time coming, but Sonic the Hedgehog will finally be making his live-action debut on Valentine’s Day! The fluffy blue video game hero has been through the motions in making his way to final development stages, but he now looks ready to conquer the big screen, voiced by Ben Schwartz. James Marsden also joins the cast as Sonic's new best friend Tom, with Jim Carrey taking on the role of the villainous evil genius, Dr. Robotnik. This one's gonna be a lot of fun!

We're going back in time in the latest entry to the Kingsman film series, in a prequel that features an incredible ensemble cast including Ralph Fiennes, Gemma Arterton, Charles Dance, Rhys Ifans, Tom Hollander, Matthew Goode, Harris Dickinson, Djimon Hounson and Daniel Brühl. When some of history's worst criminals join forces in a bid to wipe out millions across the globe, it's up to a single man and his protégé to stop them. As they do so, audiences will see just how the formation of the Kingsman spy agency came to be.

Blumhouse Productions are delivering what could be one of the most exciting thrillers of the year in their February release, Fantasy Island, based on the hit TV series of the same name. When the mysterious yet enigmatic Mr. Roarke (Michael Peña) invites a series of guests to his remote tropical resort, those asked jump at the opportunity when they hear of his promise to make their dreams come true. Of course, not everything is as it seems, and it doesn't take long for chaos to start raining down on those in attendance. Maggie Q, Lucy Hale, Austin Stowell, Portia Doubleday, Jimmy O. Yang, Ryan Hansen and Michael Rooker all star.

Emmy Award winner Elisabeth Moss returns to the big screen at the end of February in what is being described as a "terrifying modern tale of obsession", inspired by the titular classic monster character. Moss takes on the role of Cecelia Kass, a woman who is trapped in a violent and controlling relationship with a man who to the outside world, seems to be the whole package. Wealthy and a talented scientist, he's not all he seems to be and when Cecilia decides she's had enough, she escapes into the dead of night with her sister (Harriet Dyer), their childhood friend (Aldis Hodge) and his teenage daughter (Storm Reid). When her husband commits suicide however, leaving behind a vast amount of his fortune for Cecilia, she begins to suspect his passing was a hoax as a series of what first seem to be coincidences turn lethal, threatening the lives of those she loves. Another film that could be an instant hit from Blumhouse Productions. 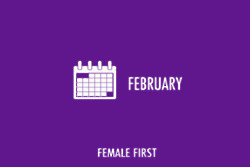 Seven things you can declutter in February