Alex Gaudino’s ‘I’m In Love (I Wanna Do It)’ is summer 2010’s holiday soundtrack. It’s already received several plays from Scott Mills on Radio 1’s Floorfillers, plus Pete Tong and Judge Jules, and is playlisted at Kiss, The Box, and MTV, with support from Galaxy’s leading specialists.

The Italian superstar is the master of the dance anthem - his previous hits include ‘Destination Calabria’ (No.4) and ‘Watch Out’. As one of the most in demand DJ/producers on the scene, Alex rubs shoulders with the European jet-set (he recently played in Monte Carlo in a club where the crowd bathe in buckets of champagne).

Known as the chief spokesman for Italian disco house, Gaudino represents all that is fresh and vibrant about house music right now, whilst injecting a savvy and twisted elegance into the aesthetics of being a superstar DJ.

Currently tearing up dancefloors across Ibiza and the Mediterranean, ‘I’m In Love (I Wanna Do It)’, looks set to return him to the top of the charts in September, maintaining his reputation for striking dancefloor gold, and proving that Italians truly do it better. 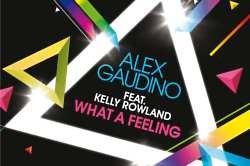