Released on Hed Kandi, May 14th (Digital release May 7th) ** Hed Kandi follows up the success of Booty Luvs debut track with their new dancefloor anthem for 2007 **On May 14th dance duo Booty Luv will release their long awaited follow-up to what was the biggest vocal track of 2006 - Boogie 2Nite  courtesy of renowned house label Hed Kandi. The new single Shine follows their massive hit which peaked at #2 in the singles chart, spending eight weeks in the top ten and selling over 170,000 copies. If that wasnt impressive enough it has racked up nearly one million video views on youtube plus to date it has received over 20,000 plays on UK radio. The vocals are provided by soulful duo Nadia and Cherise. The girls were first approached by Hed Kandi in 2005 and havent looked back since We knew that we were recording something special but did not expect this level of success says Nadia One minute we were in the studio trying out an idea the next making a video it was crazy! Shine is the perfect follow up for us, like Boogie 2Nite its a feel good record all about having a great time and loving life

The reactions to Shine have been amazing laughs Cherise Fans have messaged us via myspace and come up to us in clubs, they are really pleased that we have a follow up and its great to get this feedback directly from them

The combination of their R&B vibe with the unmistakable house sound that is Hed Kandi clearly works as Boogie 2Nite has kept dancefloors packed for months and Shine is already going down a storm. The third single is close to completion and their debut album is underway which will undoubtedly be a slice of what the girls do best - addictive vocal house.

Originally recorded by Luther Vandross, a funky R&B version of Shine was released by J Records before the Booty Luv girls got the chance to weave their soulful magic on the song with the end result being this infectious party track.

Hed Kandi have drafted in a host of remixers to ensure the track has mass appeal. Moto Blanco, nominated for a Grammy this year for their remix of Mary J Bliges Be Without You provide an instant floor filler with their upbeat take on the track.

Other mixes come from sought after DJ and producer Ian Carey (responsible for some of the dance scenes biggest anthems) adding his trademark warbling bass lines to the track transforming it into a groovy number with a chunky, filthy bass. Hoxton Whores complete proceedings with their dirty fat electro sound.

With one massive hit already under their belts and the third already planned for a summer release, it seems like now is Booty Luvs time to Shine. So if youre in the mood to party, get dressed to kill and join the girls as the phenomenal vocal anthem Shine is released on May 14th. Booty Luv 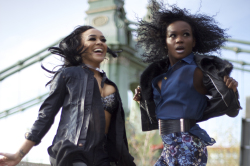