The Shapeshifters are quite literally on the ride of their lives. Not only are the duo on top form, whizzing around the globe as some of the most in-demand DJs in the game, but their latest track has recklessly thrown them into the front seat of a fairground ride.

‘Helter Skelter’ – named after the classic fairground ride – has got everyone in quite a spin. At radio, it’s already had two plays from Radio 1’s Pete Tong and he same from Galaxy’s Andy Durrant and looks set to be another big tune. Unlike many of its contemporary dance tracks however, ‘Helter Skelter’ has a stunning and truly innovative video to take it to the next level.

The man behind it is Rob Wickstead, who has already set tongues wagging with the wacky Lloyds TSB adverts that occupy a hard to nail niche between the surreal and the engaging. His video for the Shapeshifters once again occupies this hard to reach space, taking the boys on a dreamy and bizarre animated rollercoaster ride through fantasy lands, encountering weird and wonderful characters along the way.

After a long winter grafting both in the studio and on tour the Shapes’ efforts once again pay dividends with ‘Helter Skelter’ they deliver what is considered their best work since their halcyon moment, the UK No.1 ‘Lola’s Theme’.

This is just as infectious. It’s a unique sounding house track that has the Shapeshifters dance floor sensibility stamped all over it and is an excellent example how a club track can simultaneously balance between the underground and commercial territories. Immediately identifiable by its signature stabbing synth melody, it has a thumping back beat and swirling breakdowns, but it’s the vocal that helps distinguish this track, provided here by former Bob Sinclar collaborator Steve Edwards, the renowned vocalist behind ‘Love Generation’ and the Reverend and the Makers ‘Heavyweight Champion of the World’.

“It’s about all those things in life that we know are not good for us but we enjoy anyway, whether it be vices, crazy women or chocolate cake!” Simon Marlin

This is a record that is designed to destroy the dance floor as well as sound perfect on the radio. Look out for forthcoming mixes. 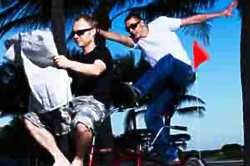 The Shapeshifters reveal their summer plans