Laura Mvula launches her debut album Sing To The Moon this coming Monday and sees her become the latest name to enter the increasingly competitive space of solo female singers.

Thankfully though, Mvula has justified her place of the BBC’s Sound Of 2013 shortlist and looks set to not only win over critics but also fill a nice little gap in the market currently left open since the tragic demise of Amy Winehouse.

We don’t think that’s she’s quite got the same wide-spread appeal of Emeli Sande, Adele or even Winehouse at the tail of her career, but Mvula’s music is far more interesting than Sande’s in particular, with her experimenting far more with electronic influences and changes on style.

Her mix of vintage Billie Holiday vocal and oh-so modern melody actually bears a huge resemblance to the feat that Lana Del Rey pulled off last year. Mvula and Del Rey come from completely different angles though, with Lana painting in broad brush strokes while Mvula prefers a far more ornate and elaborate method of construction.

If Sing To The Moon is a shape of things to come from Mvula, then her approach’s results are even more spectacular that Del Rey’s, giving her songs a nicely varied, always evolving nature that seems to be able to change on the flick of a chord. For example, it’s not until five tracks into the album that we hear the first appearance of either a guitar or a piano, with Mvula shirking them in favour of much more unusual instrumentation.

While Sande achieved enormous success last year with Our Version Of Events, it wasn’t really soul music. It was pop with the occasional soul leanings. The same can be said of Adele on occasion. Mvula on the other hand is offering a full blown soul hit though for people who’ve been left without a flag bearer since the demise of Winehouse.

While we may not see Mvula dominating the charts like Emeli Sande this year, Mvula’s debut is set to earn her a legion of devoted fans amongst those who like their music with a little more ingenuity to it. We can’t wait to see how her very intriguing and promising opening shot is received.

Laura Mvula’s album Sing To The Moon is out on Monday March 4th. 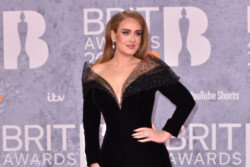