Fightstar do it The English Way

Fightstar are perhaps one of the most underrated rock bands on the scene at the moment as many metal fans dont give them a chance because of one mans history with Busted. I caught up with the charismatic Charlie Simpson, the injured Omar Abidi and the gorgeous Alex Westaway on their tour with Feeder to hear what they had to say on the subject as well as get a sneaky insight into their sexy new album and whether they prefer briefs or boxers.

Hey guys, what have you been getting up to recently other than partying with they guys in Feeder?

Weve been in the studio working on our new album; writing and doing pre-production stuff.

How are you enjoying the tour and how did it come about?

They just rang and asked us to do it and I was a big fan of Feeder when I was younger and it tied in well with out single coming out so I jumped at the chance.

Are you having a lovely time?

Yeah, were really enjoying it; its definitely different because their sound is quite different to ours because even though they were a lot rockier back in the day they have also picked up a lot of older fans along the way and so its great for us because we get to play in front of a new audience.

So how have their fans received you so far?

Pretty good to be honest. I think it will change from night to night because tonights crowd seem a lot younger than last nights so it will probably vary from show to show. But its been very positive so far.

What has been your favourite show to date?

It varies all the time; you can always guarantee that Glasgow will be awesome - anywhere in Scotland really - and Manchester is always really good for us as well as Leeds. Its weird that apart from London; the more north you go, the crowds get crazier and crazier.

It can all depend on what band you play with too.

Can you tell me a bit about your new single The English Way?

Its a step in a slightly different direction for us as Ive been listening to a lot of Eighties stuff and of course when we were writing it we added a lot of eighties synth stuff to it and we used a choir for the firs time which was really cool as weve wanted to use a choir for a long time.

We got loads of little 11 year old singers in and we didnt know all the technical terms that they use and so they were looking at us with disgust because we didnt know what we were talking about.

So youre working on your new studio album; can you give us any clues as to what its going to be like?

Its going to be quite different to what weve done before but its still going to be Fightstar. Its going to be quite heavily string-laden. Were going to Prague in December to have a full orchestra but we will still be keeping the darker side and the heavy element because a lot of our fans would be disappointed if we didnt. so were still the same band even though the stuff is happier it still has that brutal side to it.

Do you have a title as yet?

No not yet. We have a few ideas but we need to make one up soon. We have been thinking about a couple of names but we dont have one we all agree on yet. Its quite immediate when you come up with the name; everyone knows that its the right one if it takes some thinking about then you know its not the one.

We do need to get our skates on though because we need to start thinking about the art work.

Who does you artwork?

Dan Conway who is a guy from Newcastle who is an absolute genius and he paints everything on the computer. He does almost everything weve done - hes amazing.

Do you have a lot of input in the design of the cover?

We always have a meeting with him and hell want a copy of the album so he knows what the songs are about and the theme that we have going on.

The first album turned into bit of a concept album so we had a heavy input in that but I like him to get ton with it because he has such a vivid vision of what he wants to do and I dont want to start tampering with it too much. Obviously we need to know the general direction but we just usually let him get on with it.

So is the life of a rock star everything you imagined it to be?

No, not at all but its fun and you love the job the same. You think its going to be a tinsel town where backstage there are golden swans and things but it really isnt like that but at the same time its one of the best jobs in the world to have.

Anything in the media is fun because youre not doing your standard 9-5 youre always in different places so Id love to do anything within the media.

What do you think you would be doing if you werent in a band?

I dont know. Probably stuck in the studio. When I was younger I wanted to be a fireman and then when I was seven I got my first guitar and I couldnt imagine wanting to be anything else. But I imagine if I couldnt play anything then I think Journalism would be quite interesting and cool.

When you started out in Fightstar a lot of people obviously knew you from Busted; were you ever worried that you would always have a boy band label?

I always knew that it would be an interesting ride to convert the masses but it hasnt really bothered me because I was so passionate about it and I know that if I wasnt prepared for it then it might have been different but I knew it would be a completely different sound and I think we knew we could trust the fans though and it only takes me five minutes to sit down with someone in a room for them to realise how much I love this stuff. I think its just tabloid fodder now.

Its sort of like going up to a German person and saying; What about the war then? I mean come on man, get over it. Oh and that World Cup!

The editor of Kerrang! Magazine said that Grand Unification is One of the best rock albums of this decade. How did you feel when you heard that?

He was actually smashed on Jager when he said it! [FF: You got him drunk and slipped him a fifty?] seriously; I couldnt believe it, it was unbelievable you wait forever for a cracking album quote and that was it.

What would you say has been the proudest moment in your career so far?

Probably playing Reading and Leeds festivals. Its something you dream about as a kid.

Whats it like when you go out for the first time and there are loads of people looking up at you?

Crazy man! Its horrifying because youre so nervous! Its harder during the day because you can see everyone. I think when we got asked to do the Iron Maiden and Metallica tribute record that was a big honour for us to be asked to be a part of such a tribute to really influential bands.

What is there that you still want to achieve?

Headline Brixton Academy. [FF: Why there? Its not exactly Wembley!] Because we all grew up there and for me its the ultimate rock venue. One of my dreams for a long time was to play the London Astoria because it has so much history; every band thats made something of themselves would have played there.

Who would make up your super group?

Thats a tough one man because you have to get someone in the same vein of music. Probably have to have Dave Ghrol on drums, the Sigur Ros singer or the singer from Frightened Rabbit who are an amazing new Scottish band.

We ask every celebrity we interview to come up with a question for the next interview and Gok Wan wants to know whether you prefer briefs or boxers?

Who is he and what does he do? [FF explains who Gok Wan is] oh right, well it would have to be boxers all the way because briefs end up chafing especially when youre on the road.

So can you come up with a question for the lovely Funeral For A Friend?

Ask them if the prefer woman or sheep - because theyre from Wales.

Haha, I hope they see the finny side! Anyway, good luck tonight.

Read our review from that nights gig here 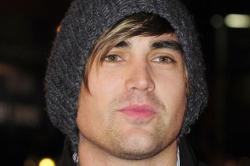 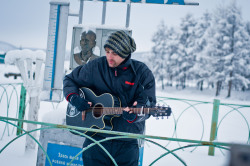