After years of gigging and posting her music on the interview Lucy Rose finally has a debut in her hand that she can share with her fans.

Like I Used To is released 24th September and I caught up with her to chat about the new record and how great is to be on the verge of releasing it.

- You are about to release your debut album Like I Used To so what can we expect from the collection of tracks?

It is so difficult to know what people are going to expect. People might have a clear idea from the videos of what sort of thing that it is going to be.

This is really the first time ever that I have been able to record them and produce them in a way that I have envisioned for so long.

And so it is really exciting that finally it is in a place where I am excited to be showing it to people and it’s not just an acoustic video or a rough idea it is the final thing.

It might be a little bit bigger in places and hopefully it will have a fuller sound on some of the songs and that is what I wanted to achieve.

- You have touched on my next question really you have been gigging around London for a while and posting your videos on line and so on so what is it lie to finally have this album in your hand?

It’s amazing. It has been a long time coming and I have been touring these songs for quite a while no - for a year or two - so it is bizarre when I am playing festivals and people are singing the songs and we haven’t released it yet.

- You mix energetic tracks with songs that are quite atmospheric so how would you describe the sound of the record to people who are coming to your music for the first time?

I am absolutely the worst at this - with words anyway and describing things. I think that there is a really big variety in the songs as there are some really stripped back and acoustic songs - Night Bus has a minimal amount of things on.

But then we have tracks like Bikes and Watch Over and they have more of a full band. But to describe the sound for the whole thing is really hard.

All of my favourite albums that I ever listen to are ones that I listen to when I am travelling and they have a sort of cinematic vibe to them so I hope that I have something like that.

- How have you found the early response to the album?

I don’t read reviews because I am the kind of person who would remember the negative and none of the positive. The only people who have got their hands on it are critics and people from the press and so I haven’t read anything.

But I am excited because I am getting a lot of people tweeting about it saying that they like it and that they are excited about it - so that is making me feel slightly less anxious about it being released.

- Charlie Hugall is serving as producer so how did you hook up with him and what were you looking for in your producer for your debut record?

I was just looking for someone who could really help me discover the sound that was in my head and be able make it happen so people could hear it.

And it sounds so much easier than it actually is as I have worked with a few different producers before hand and it didn’t really work and I felt that they were trying to make songs into hits and things that I didn’t want.

Charlie on the other hand really did give each song what it needed and that was the most important thing. His enthusiasm for the music as well was unbelievable.

I am not the most confident person and I am always doubting it and having someone like him with the amount of enthusiasm for every single song just made the process fun and allowed me to achieve what I wanted to achieve.

- But you chose not to record in a run of the mill studio instead laying down the songs in your village hall as well as your parent's house so what did you choose to do that?

At the time we had done a couple of singles together and we felt like it was the right time to start making the album but at the time I didn’t have any funding and I was still unsigned.

So I was looking to self-fund the album and maybe self-release it and go about it that way as there didn’t seem to be any other options - and I was happy with that.

I never ever really wanted to record the album in a studio as I had worked in a studio before and I absolutely hated the sterile conditions. I really hate spending money, I am really tight, and every time I am in the studio I can just feel the clock ticking and money just disappearing and it does kill the mood for me.

It makes me really rush and not want to take time over things because I worry too much about that sort of thing. So doing it at my parents was amazing.

I moved out five years ago but it was great to be able to go back home - Charlie moved in and my electric guitar player moved in and the band came and stayed.

Luckily it was something that my parents were really cool about as they just wanted to help me fulfil what I wanted to do - at the time it was either get out a big loan to record in the studio or do it at their house.

The village hall was something like £5 an hour and there was no pressure and it was fun.

My friends kept getting the train from London up to my parents house so they could sing on it and it was really great to just have them come and stay and to be able to have a meal with my family and the band.

- You also signed with Columbia Records this year so what was the major draw for you of this label?

Really it was Alison, the person who I met, who I felt like I really connected with.

I felt like a lot of people didn’t understand what I was trying to do and who I was and it just felt like the first time that it wasn’t me sitting in a meeting explaining what I wanted and it was her saying ‘I get it’ before I had even spoken. So that was really tempting for me.

- You have not long since completed a UK headline tour so how did you find your time out on the road?

It was really good. It was a month long, which is quite long, and it was really enjoyable and as soon as we came off the tour I went in for a meeting with my booking agent and I was like ‘we need to go another month in October and November’ and that is what we are doing.

I am really lucky in the fact that the band members that are on tour with me are really good friends of mine and we are just a very well oiled machine when it comes to loading and unloading out gear. It is very important to me that everyone is really hands on.

The crowds every night were unbelievable - they weren’t sold out shows but there was a really good atmosphere to them.

- As I said earlier you have been gigging for several years at open-mic's and posting your music online so what did you learn from those early times and how does it compare to suddenly going out on your own headline tour?

When I first started playing open mic’s I had no idea how to even sing into a microphone - I was also really terrible at playing the guitar.

So just the years has been about learning my craft really and learning how to improve it - I am still working on that massively.

It has just become very much what I have done for the last five years as it has just been five years of constantly writing songs and playing none stop gigs. But I am still doing it five years later and I am enjoying it more and more.

- So where did you love of music start and who were your major influences as you were growing up?

We were not a massively musical family but my mum use to listen to Barry White and Rod Stewart and my dad listened to Phi Collins and U2 while my sister and I use to listen to Radio 1 on the way to school and that was about it.

I loved to play the drum kit in the school orchestra - it was such a fun instrument to play.

It was only when I started walking to school - my sisters had left home - and I walked past a guitar shop every morning and the old man that worked there persuaded me to buy a guitar for £50.

Every other thing that I had played I had had lessons in or been taught and the self discovery and teaching myself guitar was the thing that I cherish the most about it now because I don’t have a clue what I am doing.

There is a lot of freedom to write and invent things that have been invented a thousand times before but I am just oblivious to it.

- Finally what is coming up for you?

It will probably be promo until the album comes out and then it s a very exciting European tour and a UK tour. So I just hope that this album will be somewhat of a success.

Lucy Rose - Like I Used To is released 24th September 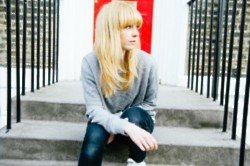 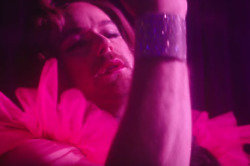 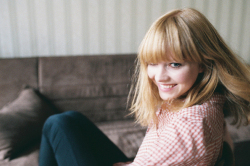