The sumptuous soundscapes of Mogwai or Godspeed You! Black Emperor. The acrobatic vocal yelps of The Rapture or !!!. The synth seductions of 'Mr Brightside' and 'All These Things That I've Done'.The lush scree at the heart of Editors, Interpol, Bloc Party, Muse, A Place To Bury Strangers, Friendly Fires and any other band with agony in their souls and hearts as black as their trousers. The Cure's influence is as widespread and prevalent in alternative music as cyanide pills at the Halifax Christmas party; their sound has become a key link in indie rock's DNA."The tipping point was a few years ago," says Robert, "when suddenly bands were coming up who weren't afraid to namecheck The Cure. We were unfashionable pretty much everywhere post-'Bloodflowers', but suddenly there were lots of young bands who'd grown up listening to 'Disintegration', 'Kiss Me, Kiss Me, Kiss Me', or 'Wish' and didn't know that you weren't supposed to like us. So we kind of knew it was happening, at some point there's going to be a generation of people who are going to go and form bands who are going to have seen The Cure. I feel slightly paternal towards some of them, the Curiosa thing [a 2004 Cure-headlined US tour featuring Smith's selection of young bands including Interpol, Mogwai, The Rapture and Muse in support slots] was almost like me saying, 'Come here, my loves.' I felt fucking competitive on that tour, but in a really good way, like, 'Now I'll show you what I can do.'" Smith is rather less paternal, however, towards the stinking, snot-haired, still- a-virgin-at-32, you're-not-a-fucking-vampire-so-grow-up-you-twat bastard child of 'Pornography' that is goth."I'm not sure that it did [spring from The Cure's music]," he argues. "When I joined Siouxsie And The Banshees I was aware that I was stepping into a goth band, in that Siouxie was a goth icon. I became a de facto goth icon around that time."When I was with the Banshees I made the point of wearing pyjamas - I wore a blue stripey pyjama top. I wanted to make a point I was not part of this world. I used to go drinking with [Banshees songwriter Steve] Severin in the [legendary Soho venue] Batcave around that time and there's nothing more gothic than drinking in the Batcave in 1983 with Steve Severin. But I would be wearing pyjamas.

"When we did the 'Faith' album in 1981, goth hadn't been invented then, we were actually a raincoat band. We were inventing goth with that album and 'Pornography'. but we weren't, we were just playing emotional music. I was feeling a bit desperate at the time, the band as a whole was a bit despairing, we thought it was going to end with 'Pornography'.

The record label had given up on us and the crowds were pretty much non-existent. We went around the world and played to the same 500 people everywhere we went and we couldn't see how we were going to play to more. And we were taking vast amounts of very strong drugs and actually didn't really give a shit. And that, somehow, gave rise to goth."

THE POP IN THEIR POMP

For every 10 'The Drowning Man's, there's a 'Why Can't I Be You?'. For every album of dour 'Disintegration's there's a soothing 'Lovesong'. The Cure have carved their unique niche in modern rock by lacing their lengthy mood pieces with mighty throwaway pop smashes - as they proved by releasing proto-goth masterpiece 'Pornography' one year and 'The Lovecats' the next.

"The pop hits have allowed us to be successful," Smith agrees. "That was always our intention, I suppose, to draw people in and then smother them. There is a small part of what we do that is quite dark in contemporary music terms; it is quite desolate, there is no hope and I love that side of what we do, but I also realise that if that's all we did then we'd be fucking awful. I've always been aware enough to know you've got to sugar the pill a little bit, but not in a banal way.

"I mean, 'Friday, I'm In Love' is not a work of genius, it was almost a calculated song. It's a really good chord progression, I couldn't believe no-one else had used it and I asked so many people at the time - I was getting drug paranoia anyway - 'I must have stolen this from somewhere, I can't possibly have come up with this.' I asked everyone I knew, everyone.

I'd phone people up and sing it and go, 'Have you heard this before? What's it called?' They'd go, 'No, no, I've never heard it.' On the same album there were songs which I'd slaved over and I thought at the time were infinitely better, but 'Friday.' is probably the song off the 'Wish' album that's the song."

Ask anyone who's hung out with Robert Smith and they'll tell you the most amazing thing about him is that he goes to the pub like that. The hair might be laced with streaks of grey and the cheeks somewhat chubbier than in his 'Kiss Me, Kiss Me, Kiss Me' prime, but Smith's iconic image - recreated everywhere from Camden's Devonshire Arms to South Park - has weathered the changing of many a fashion season.

"I hide behind what I look like with the make-up and the hair," Smith admits. "I know I do, I'm self-aware enough to know why I'm still doing it. It's uncomfortable on the very few forays into real life that I have, getting petrol and shopping, but I've had it my entire life. I'm with a girl who likes the way I look and when I don't look like I look she doesn't like me as much, it's that simple. When we started to get well-known I was saying that if I looked like Ronald McDonald that would be the goth look. I imagine an alternate reality where Ronald McDonald was the goth icon."

While never being classed as a 'drug band', The Cure have managed to keep their inner Primal Scream reasonably well hidden over the past few decades. While ex-drummer/keyboard player Lol Tolhurst was famously pissed for most of the '80s (until they sacked him), Smith himself famously wrote 'Disintegration' on a pretty huge amount of LSD.

"I used to play tennis with myself," he guffaws. " I used to take off my clothes and play tennis with myself at night in the dark. I'd hit the ball and then run to the other side of the court and play it back. Of course, there wasn't a ball; there was a racket though, it was very important that I was holding a tennis racket. Someone would always wander over when the sun was coming up and say, 'You all right?' 'Yeah, I'm fine, I'm two sets down and it's a love serve!'

"We've been fantastically excessive at certain times. There's a mentality when you go, 'Oh fuck, free beer?' It's your first Reading festival in 1978 and Lemmy's coming out of Motrhead's caravan going, 'Howwaarryeeerr?' We went, 'I think he's saying, "Come into our caravan"' and we went in and there was a line of amphetamine sulphate that went the entire length of the caravan. He went, 'Haaaavebitofthaaa.' We were like, 'What's he saying?' He was offering us this straw. 'I think this is like a five-foot line of speed and this straw means we're supposed to snort it.'"

STILL RELEVANT AFTER ALL THESE YEARS

Premiered in its entirety at a gig in Rome a few weeks ago, The Cure's new album '4:13 Dream' is a staggering return to form. Following on from 2000's dolorous 'Bloodflowers' (the climax to The Cure's emotionally bleak 'trilogy' that began with 'Pornography' and 'Disintegration') and the eclectic but patchy 'The Cure' from 2004, it's hawked as the 'light' half of a double album, with the 'dark' half to come in 2009 ("Universal didn't want a double album," Smith fumes) and is the most surprising, rejuvenated and tuneful Cure record since their early-'90s commercial peak. It takes in traditional Cure doomscapes ('Underneath The Stars'), brutal industrial eviscerations ('The Scream', which finds Smith howling like a Saw V victim), classic Cure-pop ('The Only One') and a jaunty shimmer of a song with lyrics taken from a real-life suicide note that Smith was sent in 1987 ('The Reasons Why' - "I knew the person who sent me the letter. It was a genuine suicide. They would be my age").

"I love the way this album goes through the first five songs," Robert enthuses, twitching excitedly in his seat, "because it goes from you thinking, 'Oh right, here we go, it's six minutes and it's really downbeat' and then it jumps into a classic Cure pop song and then suicide is in the first line of the next one and then it goes into 'Freakshow' which, for me, is the weirdest song on the album, and then into 'Sirensong', which is an acoustic waltz with slide guitar. Those five songs set you up so you don't actually know what's going to come next." As new album, so band. If the twists, squirms and wriggles in The Cure's career have proved anything besides their undoubted Godlike Genius it's that - pyjama-clad goth, upbeat Samaritan or nude Tim Henman - you never quite know which Robert Smith you're going to get next. 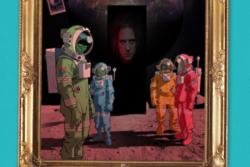 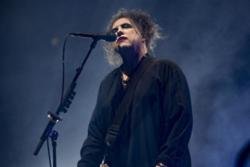 The Cure's 'most intense, saddest and dramatic' album 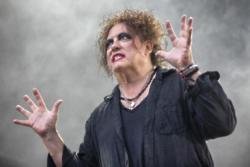 The Cure's new album may be delayed due to coronavirus pandemic