We The Kings Interview

We couldn’t let We The Kings escape our office without asking them the Questions We Ask Everyone… here’s what they came up with.

Hello there little monster, what are you up to?

Hey, we are just enjoying tour in the UK right now!! Doing the whole “tourist” thing :)

So, tell me a bit about what you’re here to promote?

We just released our new record ‘Smile Kid’ a few days ago, so we are here on tour supporting that CD!

And if we didn’t have any clue as to who you were, what should we be looking up on Google?

We are all over the internet haha, just search We The Kings and you’ll find thousands of different websites all about us! We also have a web video series called “Kings’ Carriage” it’s pretty funny.

And as Jacko had the Moonwalk and Elvis had the snake hips, what do you have that makes you unique?

I have pretty crazy red hair I guess…trying to bring back the long hair rocker look haha.

Now, clearly we need to get to know each other more, so tell me an interesting fact about you that noone else knows?

Well I don’t know if there is a fact about me that nobody knows…but I do know that there are only a few people who know that I’m actually really good at soccer…ehh ‘football’ to be more politically correct!

What song do you wish you’d written?

I wish I had written Fix You by Coldplay. It’s one of my favorite songs of all time!

If I was contemplating coming to your show or sitting at home and TV, how would you convince me to come out?

And if you were to take me on a trip to your hometown, what would be the first place we’d go?

THE BEACH!!! It’s the best thing about where we are from…amazing beaches!

What’s the best prank you’ve ever pulled on someone?

We painted one of the touring band’s van purple and gold while they were on stage. It actually looked really awesome and they were pretty excited to say that We The Kings painted their entire van.

And what’s the most daring thing you’ve ever done? Please tell us how it ended up!

We lit somebody on fire once haha…but it was all under very close watch. We ended up getting yelled at by the venue, but other than there were no consequences.

If you had to date a member of the same sex (or opposite sex if the case may be) who would it be? Mine would ALWAYS be Angelina Jolie.

My celebrity crush is Natalie Portman! She is amazing…if I had to go for somebody in the same sex, it would probably be Johnny Depp…he’s the man!

Have you ever been naked in public?

Have you ever been arrested?.

Yes, for wearing a ninja costume in a convenient store…they thought I was going to rob the place but I was just doing it as a dare.

Speaking of prison ‐ if you were to send someone to prison for crimes against music, who would it be?

What were you doing last night at 11pm?

I was at a casino with some of the members of You Me At Six playing Roulette….I won big!

Watch We The Kings Perform An Exclusive Live Set

Win We The Kings Goodies!


We The Kings’ Travis Gets Blogging  c

Tagged in We The Kings 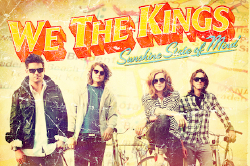 We The Kings - Sunshine State Of Mind Review 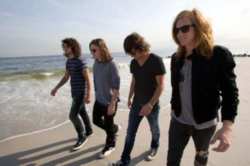 We The Kings February Tour 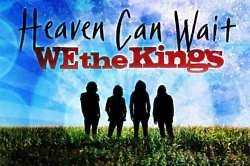 Song Of The Week : We The Kings - Heaven Can Wait