Candice Gordon discusses her brilliant new single 'The Kids Are Alt-Right' with Female First, as well as her influences, challenges in the music industry, and more.

Following the release of her brilliant new single The Kids Are Alt-Right, we caught up with Candice Gordon to put some questions to the star, all about her music, inspirations, challenges within the industry and much more! Providing a unique view on the world of music, politics, and beyond, Candice certainly made for one of our most interesting interviewees! Read on to find out what she had to say… 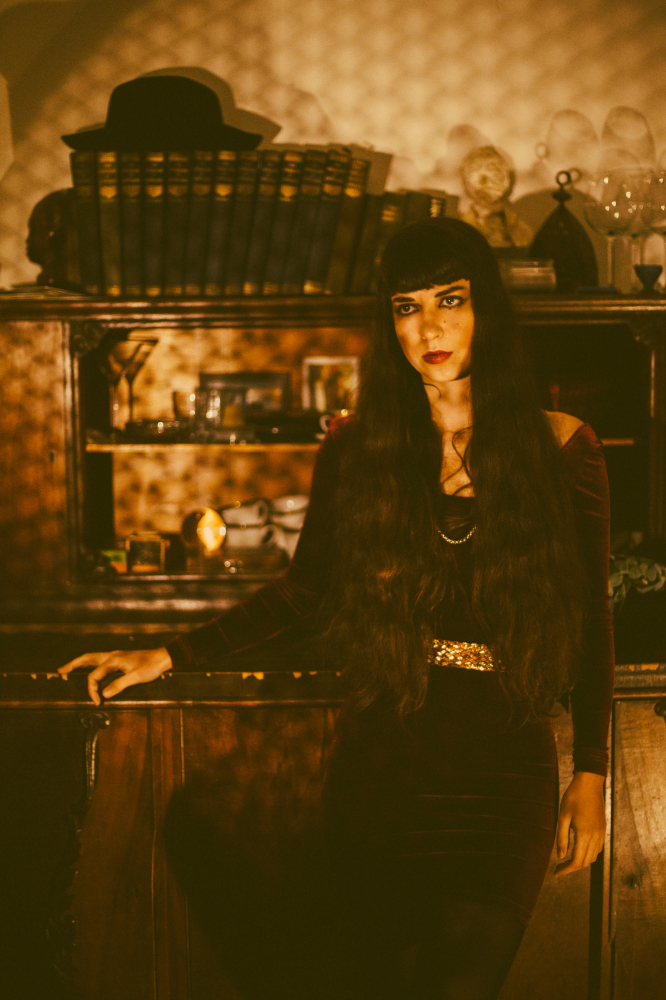 For those who may be new to your music, how best would you describe your sound and yourself as an artist?

I write more conceptually than autobiographically, and it’s heavy sometimes, and a little tongue-in-cheek on occasion. When I’m performing, I channel the girl from The Exorcist (so I guess Satan?), or just a wild animal (like a dik-dik). So I guess, imagine a Satanic dik-dik if you want to be lazy and not check my music.

What are some of the biggest challenges you’ve faced in the music industry so far?

Blacklisting, corrupt systems of power and control… And the ubiquity of terribly s**t music. Like really. If you’re working in the music industry, prepare to be surrounded by people with a lot of power and terrible taste in music. And even if they have good taste in music themselves, they’ve gotta prostrate themselves to some God-awful s***e that the masses probably won’t mind. Because capitalism. And the masses have terrible taste. I’m sure I sound not bitter at all here, but honestly I do wonder if THAT many people don’t recognise that what they’re peddling [is] s**t and aren’t just playing along so they don’t get sacrificed by the cult. It’s perplexing.

Being an artist is by no means a career path. You’ve got to Fitzcaraldo that s**t through impenetrable forest over huge mountains. Except, unless you’re Elton John, and you have 50 people under you hauling your ship piece by piece through the vegetation, it’s just you and a machete hacking your way through blindly. At any point you could go in the wrong direction and you hack your way right off a cliff and into a river. Sometimes you get lucky and find a banana. A much wiser career path would be selling the myth to musicians that they can have “success” if they buy your services.

When it comes to your music, how important is it for you to have creative control over the work you put out?

I work with a lot of creative people and usually we have to find common ground between what my vision is and what they are willing and able to contribute. In the past I have regretted some compromises I made because I was collaborating with people. If I am not paying them outright and they have a stake in the project, then you’ve got to see how far you are willing to compromise. The mixing engineer took a lot of Shane MacGowan’s vocals out of Before The Sunset Ends, I felt willing to compromise with him because that was a creative choice he wanted to make and he was a really excellent mixing engineer. Looking back, I really regret that decision.

Your new single The Kids Are Alt-Right is a brilliant politically-charged piece; can you tell us a little bit about the creative process behind the new track?

It really came out in one fell swoop. These ideas sort of gestate in my mind until they’re ready. And this one was really ready. I had been previously been thinking deeply about the rise of fascism in the 1930s and was feeling unsettled to see reoccurring patterns now. The Gen X, Gen Y, and Millennial generations I feel have been a real let down for me. We grew up with this message that the future was ours – young people’s – for the taking, the wild rebellious youth would create a great movement, but actually it was all propaganda. The invention of the teenager was made post-war for the baby boomers, with all their scorched earth space to claim. And they claimed it, there has been a relentless structural land grab by the boomers and they have left the rest of us nothing. Even now they’re inseminating the minds of young people with utter trash and nonsense to serve their power structures. The Kids here are conservative, backwards thinking, but techy! It’s weird.

How have you found the response to the track since it made its debut, both from fans and those who are members of the alt-right?

For the most part I’ve been getting great response. One lefty guy contacted me looking for explanations because his critical analysis skills were a little limp. But for the most part I think people get it.

It was really creepy when I started getting attention from alt-right people on YouTube and Facebook (because algorithms!). At first I was a little scared of their utter determination and dedication to their cause. Like they spend their time searching YouTube for things mentioning the alt-right and so that they can say it’s a bit “gey” or something. Then I was a bit amused because they’re really pathetic. I’m back and forth between fear and amusement with the alt-right.

Where do you think the world is headed when it comes to politics and the like?

I have very dystopian predictions. I think that we are operating within a system that makes it highly likely that the world will get MUCH more unequal, oppressive and violent, aided massively by tech advances. When climate change really starts putting pressure on the global community we’re going to see more extremes in politics and more anti-democratisation. I think that there needs to be very active grassroots movements from the masses to the curb this from happening and to use technology for the greater good. But that needed to happen 30 years ago! But moreso, governments need to set in place regulations to protect us.

A campaign to bring in UBI (universal basic income) is something I’m very interested in. imagine the human potential that will be released when we are emancipated from the rat race! The EU (European Union) needs to be reformed but I do love the idea of it, and I’m very much in support of a more unified Europe. And we should implement sanctions on companies who aren’t paying their taxes. I would quite happily see a ban on companies from operating here when they aren’t contributing. Anyway, I’m an artist and not a politician, but there’s my 2 cents and some insight into some writing I’m doing.

Aside from social movements and politics, where else do you draw influence and inspiration from for your music?

Other artists, friends of mine, history, science, and occasionally altering my mind.

I run a group called The Salon; we have events and discuss science and Philosophy. A lot of my last album Garden Of Beasts was inspired by these meetings.

I’m looking forward to some exciting collaborations this year with artists based here in Berlin. I’m turned on nowadays with newness and experimenting. But I guess your question is referring to a grander fantasy and I’ll answer that with: all of my heroes are dead.

Can you tell us a random, funny fact about you that not many people know?

I love chillies so much that I carry some around with me in a little tin with dedicated little chilli scissors because I just don’t enjoy food unless it makes me cry.

Career goals are just to keep creating. There are no awards or prizes that I respect or would aim for.

Finally, what should we expect from you in the coming weeks and months?

I’m working on an animation for The Kids Are Alt-Right. It’s laborious and slow work but it’s really starting to shape up and it’s a lot of fun!

I have a song coming out this week that I am donating to Irish Abortion Rights campaign. I have a lot of touring this year but in between that I’m working on some very new music I’m hoping to release this summer.