"If you’re looking for some chill s***, move on because our music is lyrically exposing of people and society and will make you wanna rip something to shreds."

Hailing from South London, Glossii are a four-piece unafraid to take on the world with their incomparable talent. Following the release of their new single Runaway Rockaway, we caught up with vocalist Sofia Zanghirella to find out a little bit more about them, their journey so far, and their plans for the future. 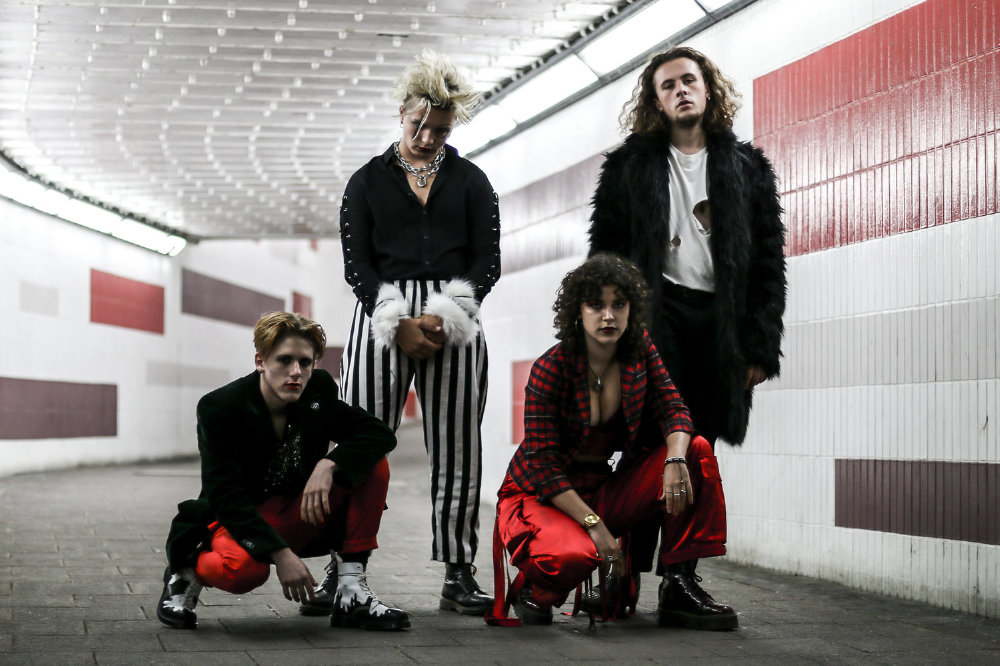 Glossii will have you wanting to "rip something to shreds"

Aggressively sarcastic. Doesn’t hide the truth and is 100% raw. Each song is slightly different but follows the post-punk/new wave/indie rock scene. If you’re looking for some chill s***, move on because our music is lyrically exposing of people and society and will make you wanna rip something to shreds.

I think, for our band as a whole, just understanding that not everyone is going to love us because some people aren’t supportive of what we stand for which are things like the LGBTQ+ community, wearing makeup and whatever the f*** we want and doing whatever we want.

Probably the hardest career to be in but we’ve been so lucky with all the mad opportunities we’ve gotten in such a short space of time and that’s all thanks to Richard and Star who’s managed and guided us through it.

We need to have 100% control over our creative content because otherwise we don’t feel like it’s ours. Obviously we will listen to anything that other people will say like George Murphy who helped us record our EP [and] who made us feel so much more creatively confident but personally, with lyrics, I don’t think I would be able to sing anything that wasn’t my work because otherwise it’s not personal to me and I can’t have a strong emotion towards it, which is what drives my performances and my love for making music.

I think we draw inspirations from a s***-tonne of people. In terms of bands, definitely band like Garbage, Slaves, Wolf Alice and maybe a hint of The Black Keys, but also many many more. I feel like, personally, I get so many influences from all different types of singers. Jessie J has always been an idol for me because of her f****** incredible voice and I feel that her power has really influenced me. Lana Del Rey’s melancholy, femme fatale lyrics and aura has influence my lyrics and performance too and Taylor Momsen from The Pretty Reckless was who really made me want to explore the angrier and more punk rock side to my performance and character.

In terms of the band, I think it would be mad to do a collaboration with Wolf Alice because of how diverse their music is and how sick it would be to merge their more indie sound with our post-punk sound. If I could do a vocal collaboration with someone it would probably either be a subtle RnB duo with Lana [Del Rey] or a power ballad with Christina [Aguilera] (laughs).

I have an extremely pathetically painful phobia of pomegranates.

I think our definitive aim is to just have fun and allow other people to have fun. I think that the world just needs to loosen up a bit and just get their anger out in order to be less concentrated on stupid things and wasting time on them and just find what makes them happy. We want to inspire people to be free and open with each other and accept everyone. I hope that my lyrics can speak to someone, even if it’s just one person. I think that’s my definitive goal.

I hope to be doing exactly what we’re doing but just on a bigger scale and with more and more people screaming my lyrics at me. I love it when the crowd is buzzing and the floor is bouncing and I hope that next year, instead of it bouncing, it will be breaking...

We’re recording another two songs to add to our EP soon and then around January time we will be releasing our third single. We’re headlining a Halloween gig at The Boileroom in Guildford which will be mad, especially because Halloween is the best day of the year. The music video for Runaway Rockaway (our most recent single) will be coming out soon as well.