With album number three just on the horizon, we got Richard and Adam in the office for an exclusive interview and live session. Today, check out what they had to say about the album and their new music in this exclusive video interview below.

Richard and Adam, you're taking us to the movies with this new album, what was it about this theme that appealed to you?

Richard: Well I think the thing is we've always grown up together haven't we watching films? And as a family we always go to the cinema as often as we can so it was something that we were really interested to do, and what's really great about movies is that there are so many classical songs from films that you don't realise, or songs that really do lend themselves to that. So it's definitely something we definitely wanted to pursue, and we were extremely lucky obviously to be given the third album and the opportunity to do 'At The Movies'.

What are some of your favourite movies?

Adam: Richard's a massive film fan aren't you? He goes to the cinema once a week don't you? He always asks me to go and I jump along don't I with you?

One of our favourite films has got to be Iron-Man 3 only because really we received a phone call off Britain's Got Talent while watching Iron-Man in the cinema saying that "you're through to the last auditions in Birmingham", so we'll say Iron-Man 3.

You've taken on some classic songs with the album do you ever feel a pressure when doing these sorts of things?

Richard: Well there's always that slight worry because obviously, we try and do classical crossover, so you choose a song that's not necessarily supposed to be classical and then you slow it down, you give it the orchestra and the key change. It's always really interesting to see how things turn out. It is worrying but I think what's great is when you hear the end result.

At the end of the day Sony know what they're doing and they're one of the biggest companies in the world, and when these songs come together and they're completely transformed...

Richard: ...Yeah, all our reservations against certain choices, we're like "we're not sure", and then it comes together and you're just totally blown away, and you feel totally at ease, and you feel like it's alright don't you, and it's all come together.

Did you have to make a lot of cuts to the album or did you have the songs firmly in mind that you wanted to do?

Adam: Yeah, we put some options down and then they give us some options, but mostly it's what Sony want and how they think they'll work.

Some of the songs they put down when we seen them we thought: "how is that gonna work?", like 'Everything I Do' and things like that but when you go down to London and you listen to the arrangement they've made, they change it in a classical way and when you sing along to it we absolutely love it.

This is the third album now which is incredible for us and each time we go down, the songs and the way they make them are just perfect, so we're excited now, because it's soon when the album comes out...

What was the fan response like when you announced the album and its theme?

Richard: Oh it was brilliant. We've got a group of really hardcore fans called Richard and Adam Groupies - there's about 1,500 of them at the moment and as soon as anything goes live they're absolutely all over it...

Adam: T-shirts they've got haven't they?

Richard: Yeah they have!

Adam: Every gig they're there.

Adam: They can fill out a theatre on their own.

Richard: They can, which is great! But yeah, everyone was really supportive of it, we haven't heard any negative, it's all been positive, I guess people just need to hear it now.

Do you have a single in mine for a lead single?

Adam: We did with The Christmas Album didn't we?

Richard: Yeah we did with The Christmas Album. I think one of the ones I would definitely probably like to be a single and one of my personal favourites...

Do you have plans to be touring with the album?

Adam: February and March, next year. We did one tour this year and then we're doing another one so we can't wait. Luckily the first one went well, fingers crossed for the second!

Did you manage to catch Britain's Got Talent this year with Collabro?

What did you think of the group?

Richard: I think they're really good.

Adam: We're singing with them I think, we're doing a couple of songs with them, 24th of August I think, or the 25th, so it should be interesting. I've never met them before but they sing similar stuff to us don't they?

Richard: Yeah, harmonies. A four/five-part harmony group. They're great but they're singing some more modern songs aren't they like pop songs and things like that so. It'd be good to do a 'collaboration'! (laughs)

Richard: It's been great. Genuinely, in this industry people say there's lot of issues and the music industry is a dodgy one but Sony have been absolutely solid, and the team that's in place with us at Sony is absolutely incredible. We see them everywhere we go, and they're behind us 100%.

They came to see us on tour, we get birthday presents! They're really, really personal and they're great friends of ours now, and we feel absolutely, totally and utterly privileged to have them on-board, and the team we've got, they're great aren't they?

Adam: Yeah, they are.

Finally, what's next for you alongside the album?

Adam: And then we wait to see what happens don't we after that!

Richard: Then we've got our fingers crossed, I mean...

Adam: For a fourth album!

Richard: Yeah, we've heard word of going to New Orleans and doing some stuff in America which is interesting and quite exciting, so we've just got our fingers crossed really for the future and hopefully we're onto album number four! 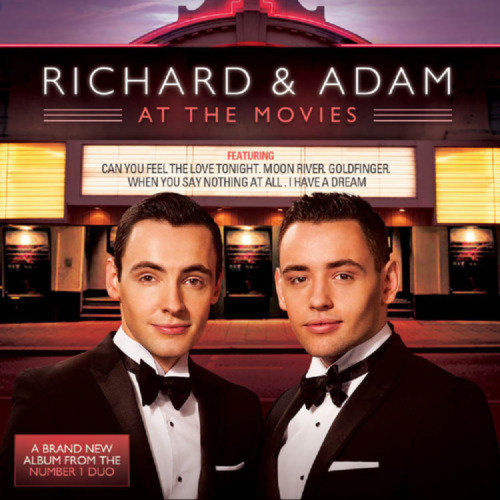 Richard and Adam: At The Movies is available to pre-order now and is released August 11.

Check back tomorrow for an exclusive live performance from the boys, on-site from 8am. 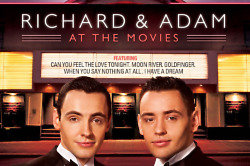 Richard and Adam exclusive live performance - 'Everything I Do' 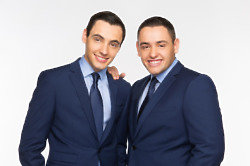 Richard and Adam reveal 'At The Movies' album tracklisting