"I believe you can achieve anything you set your mind to: you just have to work hard, be yourself and believe!"

Following on from our chat with the brilliant Sam Callahan all about his fitness journey, we got some more time with the star to talk all about his first love and the reason we're all crazy about him - his music! Ahead of the release of his new track Stitches and Scars tomorrow (September 28) - for which we'll exclusively premiere the music video on Female First in the morning - we caught up with Sam to chat all about his recent tracks and more. Earlier this year you released your tracks Burns Like Fire and Say Something; how did you find the response from fans to these tracks?

Really good actually! It's been a long time coming for me; the chance to release my own music again after The X Factor.

I was so nervous about releasing Burns Like Fire, which was the first release, because I think it's a case of the unknown. I know I like what I write, but I didn't know if other people and my supporters would love it as much as I do.

It's been great because Burns Like Fire was my first Top 100 and then Say Something allowed me the opportunity to do a UK tour with my own music again, and after all, that's why I do what I do: my love for the music, the live performing and the people that support me along the way!

We also dropped the music video for the song Say Something on Female First; what was the experience like of filming that?

The Say Something music video was wicked fun! I went out to Canada to film that one, although we filmed it in minus 28 degrees C which definitely wasn't my favourite part. It was cool having so many people support me and work on the project with me; we had something like 28 dancers and five characters involved in that, along with a 15-strong film crew.

Can you tell us a little bit about your new upcoming music?

Absolutely! The new track imminent for release is called Stitches and Scars, and it was about a really tough time I had at one stage in my life. I had made some stupid decisions, I'd forgotten and neglected some responsibilities that I had, and it had put me in a really bad place mentally. At the time I was moping a lot and walking around staring at my feet in a very negative mood, and that is quite simply not how I roll! I'm super positive generally and have a wicked outlook, even at times when most people do not.

My brother turned around to me at the time and told me: "You could have not made that decision, you could have not made those mistakes, you could be less wild and less like you. You could be more boring, more reserved and you could never step out of line, but that's not you and we love you for who you are! It is your imperfections that make you who you are and you need to stop beating yourself up and own them!"

This really resonated with me; it made me realise that I had to get myself out of that rut and those words he said to me on that day were the reason that I wrote this song. At the end of the chorus I sing: "Would I really be me without my stitches and scars?" and THAT in a nutshell is what my brother taught me at the time. We have to accept who we are and own it!

The studio is somewhere quite mysterious for those who aren't singers! Can you tell us a little bit about a typical day in the studio? If indeed there are any 'typical' days!

The studio is different for everyone! Every artist and writer works differently and every day is different at the studio, especially if there are new people brought into the session to write or record.

Me personally, I have now been fortunate enough to have worked with hundreds of different producers and studio engineers and my favourite is my current producer Jamie Sellers of Runwild Music in Essex.

Finding the perfect partnership between myself and a great producer has been an ongoing battle for me in my career and Jamie understands me, understands my sound and even understands my crazy ideas and turns them into exactly what I have in my head, but the real polished version!

If I'm rocking up for a day's writing and recording, usually we get the guitars out and start jamming a few chords first; you have to work out what feels right, what resonates nicely with you personally and also I guess, what speaks to you in a way that you feel you have something to say using those chords and that music! Then I get pen and paper or my laptop whilst Jamie starts to work on the basics of building the track and the whole thing begins to grow from there... But yes, every studio day as a whole tends to be different!

Where do you draw your biggest influences or inspirations from when it comes to your music?

My influences come a lot of the time from other artists that I listen to like Ed Sheeran, Shawn Mendes, a little Bruno Mars and one that often comes up a lot too is Maroon 5. However, the subject matter from most of my songs I draw solely from are my own real life experiences, as I think that's what makes the best music - when it's honest and real!

You've been in the music business for some time - what are your major goals or ambitions when it comes to this side of your career?

My goals have changed over the years, but now more than here I want a true core fanbase that come to my shows and love my music as much as I do. It doesn't have to be that everyone in the world loves me or that I am the most successful artist going, I think I am more interested in waking up everyday and doing something I love for people who love it also!

I've always wanted to travel with my music which has happened more in the last two years than ever before, so I suppose that's working out well. I have always been someone who'd love to travel, but having chosen a career path that takes me giving so much of myself 24/7, I decided that if this was going to be my life, then I would have to use my music to travel for gigs, studio sessions and anything else along those lines!

If you could collaborate with anybody on new music, who would you choose and why?

If it were to be anybody? It would most likely be Ed Sheeran. I think his lyrical content and the stories behind his music are what make him one of the greats in today's music industry. I think he'd be an awesome guy to spend a day in the studio with.

Tell us more about your new track Stitches and Scars, and the music video for the tune.

It went on pre-order on September 25, and it goes on full release September 28! I wanted to make it so that when people hear the track on the radio, this time it would be available for download pretty much straight away.

I've also got some professional athletes and people of influence involved in the making of the music video for this track.

I wrote Stitches and Scars about a hard time that I had personally, but the whole crux of the song is based on getting up again after hard knocks, overcoming the hurdles that you might face in your career, or just life on a day-to-day basis too.

Everybody has something that they have to overcome and most have things they want to achieve in life too. We all have our own faults and imperfections but all in all, they are what makes us unique and we should choose to own them, and use them to our advantage for our greater good!

I believe you can achieve anything you set your mind to: you just have to work hard, be yourself and believe! 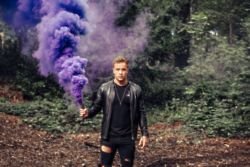 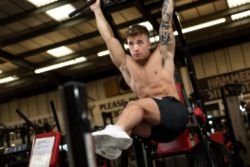 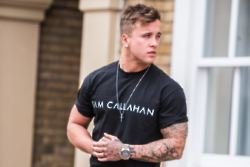