Rocker Sheryl Crow once hung up on Sir Mick Jagger because she was convinced the early morning phone call was made by a prankster.

The All I Wanna Do hitmaker had just released her debut single in 1995 when she received the shock call - and she admits her haste to dismiss the incident as a joke almost cost her the rare opportunity to join the Rolling Stones on tour in Miami, Florida.

She says, "In 1995, All I Wanna Do had just come out and I get a phone call from Mick Jagger at 4.30 in the morning. I answered it and was like,'This is so not funny' and hung up. I hung up on him. The phone rang again, and I'm like, 'What?' And it was Mick. He was like, 'Oh Sheryl...' Hesaid we're doing a pay per view in Miami do you wanna come play? Yes I wanna come play. "Four days later, private plane, and I'd never been on a private plane in my life.

I'm calling everyone I know, 'Hey, I'm on a private plane! Do you wanna come fly around with me on my private plane?' So I get there, I was met by the Rolling Stones.

I had Thanksgiving dinner with them, thewhole band and crew". But Crow was racked with nerves in the hours leading up to the big showand only managed to pull herself together moments before she hit the stage.

She adds, "The next day we were gonna play and I was so nervous I threwup all day long. And then right before we walked out, (Stones' saxophoneplayer) Bobby Keys offered me a swig of his tequila!"

The singer has since become good pals with the Stones and honoured the British rock legends on Wednesday (12May10) when she performed her rendition of their hit All Down The Line on U.S. TV's Late Night with Jimmy Fallon as part of the show's Rolling Stones week. 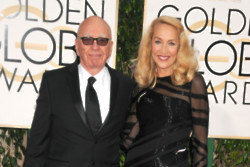 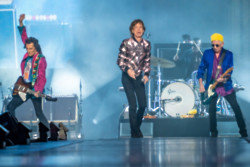 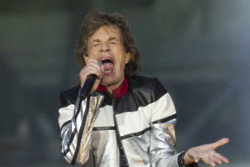