KIEDIS TASTED WOMEN AND DRUGS AT 12RED HOT CHILI PEPPERS frontman ANTHONY KIEDIS enjoyed first taste of women, and smoking marijuana, at the age of 12 - under the guidance of his wild father.The 41-year-old rocker recalls how his dad, JOHN KIEDIS II, taught him to roll and smoke a joint and then, when he was enjoying the effects of the marijuana, handed his son a disposable camera to take photographs of his 18-year-old girlfriend's breast.In his forthcoming autobiography SCAR TISSUE, Kiedis explains, "Dad called me into the kitchen. 'Do you want to smoke a joint?' he asked me. He was sitting at the table with a pretty 18-year-old girl he'd been hanging out with that week."Then he took out some rolling papers and showed me exactly how to roll a perfectly formed joint. Then he lit up the joint and passed it to me. It went around the table a few times and then I realised I was high."Then my dad handed me an instamatic camera and said, 'I think she wants you to take some pictures of her.'

"I said to her, 'What if we pull up your shirt and I'll take a picture of you?' 'That's a good idea, but I think it might be more artistic if you just had her expose one of her breasts,' my dad said. I took some pictures and no one felt uncomfortable about it."

Get the low down on your favorite Celebrity Gossip and News 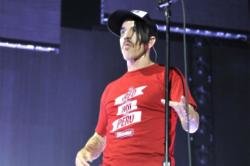 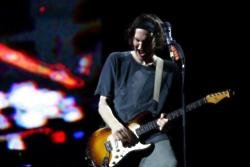