Christopher Maloney has begged his haters to stop abusing him on Twitter, after he finished third in this year's series of 'The X Factor'.

Christopher Maloney has begged his haters to stop abusing him on Twitter.

The 34-year-old singer - who finished third on this year's 'X Factor' - has been targeted by many people on the social networking site since exiting the ITV1 show over the weekend and he has now asked them to leave him alone.

He tweeted: "Please stop online abuse, all I done was follow my dream, coming 3rd was an Â­achievement. Feel gutted I didn't win and I'm unwell right now. Please. (sic)"

However, his plea didn't seem to work and he was still being targeted.

Jed White tweeted: "Hi Chris im following you to abuse you (sic), while Matty Hopper, added: "No, you talentless piece of c**p."

He then stormed out of the 'X Factor' final rehearsals on Sunday (09.12.12) after allegedly turning up drunk and being abusive to contestant Carolynne Poole.

Speaking to Alan Carr during filming of his 'Chatty Man' show - which airs on Channel 4 tomorrow night (14.12.12) - Olly said: "He did once have a go at Caroline. He said something in a newspaper and then he came on 'The Xtra Factor' so that was awkward."

However, he added: "To have been booed every week must have been hard. It even happened to him at the final and I was like, 'Come on'. He is changing his life, even if he has become a complete... 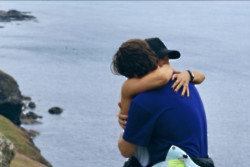