Sue Johnston has admitted she is concerned for the young girls of today's society because they're all so obsessed with having surgery to alter their looks.

Sue Johnston is "frightened" by beauty-obsessed youngsters these days.

The 74-year-old actress has admitted it breaks her heart when she sees young people altering their looks with cosmetic procedures because she doesn't think they understand that plumping up a pout and blowing up their bosoms won't make them happy.

Speaking to the Daily Mirror newspaper, she said: "Don't think that just because you have your lips pumped up or your t***s popped up, that you're going to be accepted and that life's going to be good. It ain't. Life's hard and you've got to learn to be strong really. It does frighten me.

"We all live in selfie land and have fear for our kids that they're growing up to be totally self-obsessed and looks-obsessed and the dangers that surround all that. You see girls in their 20s everywhere with their lips pumped up, it ­actually hurts me.

"I think, 'What will they do when they get to my age? Will they get there?' This strange way they must be looking at their faces, it's desperate and it's so upsetting."

And she isn't the only one who is sick of seeing girls fiddle around with their features as her 'Age Before Beauty' co-star Robson Green thinks women should age "gracefully" and has blamed shows like 'Love Island' for encouraging them to go under the knife.

He explained: "Grow old gracefully and stay away from the knife.

"'Love Island's in your face, you look at them and very young girls have had stuff done to their face and their boobs, it's just ridiculous.

"Any treatment that has the words 'cut' and 'puncture' in it, should be avoided at any cost. Nivea and cold showers... that's it for me." 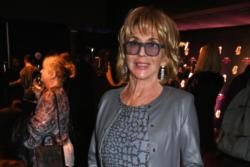