As Evelyn Powell, Rebecca Wisocky played the bitchy housewife we all loved to hate in season one of Devious Maids, but throughout this second season we've seen a softer side to the character, and hate has quickly turned into love and admiration.

FemaleFirst got the chance to exclusively interview Rebecca ahead of the season two finale, so read on to find out what she had to say about what we can expect going forward, working with her fellow Devious cast and crew and much more. 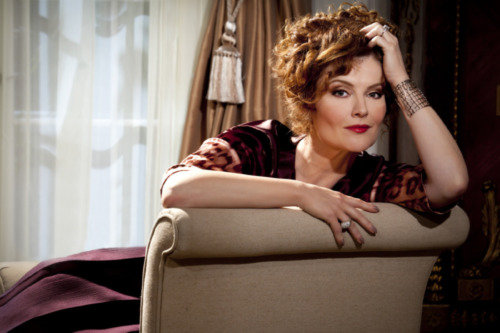 Devious Maids has become such a success, why do you think audiences all over the world have taken it so well and to their hearts?

Thank you for saying that! It makes me happy to get tweets and messages from so many places I’d love to visit. We’re delighted that people from all over the world are loving the show.

I think there’s a fascination with the excess that a place like Beverly Hills represents. At its best, the show has all the enjoyable delicious elements of a soap opera and also the complexity and social commentary of a satire.

It’s also such a big cast of diverse and interesting people. I think the fun we are having together is infectious.

What was it about your character Evelyn Powell that drew you to the role? Is she a fun part to play?

I’m having the time of my life! I love playing Evelyn so much. Marc Cherry writes for women exceptionally well. And, he has a special knack for the musicality and arch verbal warfare of The Powells. Evelyn gets some wonderful lines and I knew I could have a great time exploring all the layers beneath the evil bitch façade.

She's definitely become a much more well-rounded and more likeable character this season, is this side of her one you wanted to explore?

I’d hoped that once people saw ‘behind the mask’, so to speak, they’d fall in love with Evelyn. A little empathy for the devil!

I was glad that she got to be a bit sexy and vulnerable this season. It was her turn to have some fun. Don’t worry though; she won’t ever get too soft. So much of what makes The Powells interesting is their conflict and pain and how they blindly turn it on one another and those around them.

How is the experience of working with people such as Marc Cherry and Eva Longoria who had her directorial debut on the first episode of this season?

I love Marc and will be forever grateful to him for this role. And Eva has been a beacon. She did a wonderful job directing the first episode. It was great to get to play with her and to enjoy the chemistry and history she shares with Marc. I continue to be astonished by Eva. There seems to be nothing she can’t do, and looks amazing while doing it. I hope she directs Devious Maids again and I definitely hope she graces us with a cameo.

What's the chemistry like on-set with the rest of the cast?

LOVE FEST. Really. We’re all so uniquely well suited for our parts and Marc has engineered a show where we all get to shine. It’s easy and a great pleasure to cheer one another on.

Tell us a little bit about a typical day on-set playing Evelyn Powell.

Well, first I have the great joy of sitting in the hair and makeup chairs of Katrina Suhre and Ariane Turner for an hour or so. Then I put on an outfit that has been designed and tailored and bejeweled to utter perfection by Emmie Holmes and her team. Then I get to play with some of the most talented generous scene partners and crew that I’ve ever worked with. And get a free lunch. Come on! When it really works, it’s a team sport and it’s really, really fun.

In an interview we did with Ana Ortiz she said that if she could swap shoes with anyone and play another character for a day it would be Evelyn! Who would you like to take on for a day on-set?

Evelyn does have great shoes, right? Tell her she can’t have them! I adore Ana and I’d love to work with her more next year. We have a lot of fun with the unlikely friendship between Evelyn and Marisol. But as to what character I’d switch hats with for a day? Maybe Rosie? She seems to be the most opposite to Evelyn in nearly every way. So that’d be a good challenge. Would I get to look like Dania [Ramirez]? Sign me up. Or maybe the female version of Mr. Spence? I love what Grant [Show] has done with that character. Ultimately though, Evelyn is the bitch for me.

We've reached the second season finale of Devious Maids here in the UK, what should we expect from the final scenes this year and going forward?

Ooo it gets crazy. I don’t want to spoil it for you. There’s dancing and violence and kissing and a wedding. Secrets are spilled, hearts are broken and mended and broken again. The season ends with some lives in the balance and a question for the Powells as to “where do they go from here?” I’m excited for you to see it and I hope we get to continue with a Season 3!

Dominic Adams came into this season as a fresh face and you've been heavily involved with his scenes, how was he to work with?

He’s so bloody attractive. He swept Evelyn right off her Manolos. She took a tumble. Dominic has been lovely and game and a gentleman. I love that the fans really responded to that storyline. As much as they love Adrian and Evelyn together, it felt like everyone was really rooting for Evelyn to feel like the object of desire again and Tony certainly did that. I also love that his betrayal gave Adrian the opportunity to take care of Evelyn in an uncharacteristically selfless manner. Tango style! 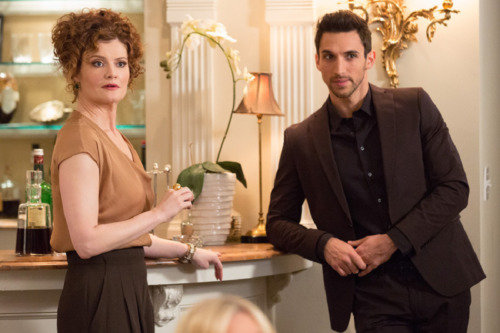 You and Tom Irwin (Adrian Powell) come across so well together and have some brilliant scenes, is he an easy person to film with?

I couldn’t have asked for a better partner in deviousness! Tom and I work in a similar way and have found it endlessly fascinating to dissect the psychology of The Powells. We have a wonderful time together and have become good friends. I can’t say enough good things about Tom.

Where would you like to take Evelyn in season three?

I think it would be nice to see the Powells have a more united front in a next season. Of course they’ll always fight and needle one another. But it’d be nice to see them back on the same team. Maybe to accomplish something dastardly together...? I don’t know. I trust Marc. I have no doubt he has something fun up his sleeve and I’m on board.

You've played so many fantastic roles, do you have any favourites?

What do you like to sit down and watch if and when you ever get a moment to do so?

I love cooking shows. Top Chef and Anthony Bourdain. And Project Runway. I’m desperate for Valentina to be a contestant so Evelyn can meet Tim Gunn. Wouldn’t that be awesome? I also love Key & Peele, Orange is the New Black, Girls, Sherlock, Downton Abbey, House of Cards... There’s a lot of great television happening right now.

What would you note as some career highlights?

I guess the times it’s felt most like a team sport.

The first few years out of school I made work and toured with a dance theatre company called “Big Dance Theatre Co.” Those were some of my most happy and exciting performance memories. I did a late night serial comedy called “Hot Keys” by the genius Jeff Weiss for a while that was utter joy. I did a play that I loved Off Broadway called “Amazons and Their Men” by Jordan Harrison for which I was given an OBIE award. That was a wonderful honour.

And, honestly, Devious Maids. For all the reasons I’ve mentioned and more.

Finally, do you have any plans or things in the pipeline you could share some details about?

I just finished shooting an independent film called “Hello My Name is Doris” starring Sally Field. It’s a very funny and beautiful script written by Laura Terruso and Michael Showalter who also directed. He is very very funny and assembled a big ensemble cast of people that I felt so lucky to get to work with. I can’t wait to see it. 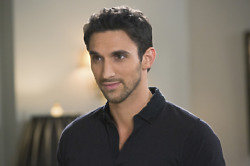 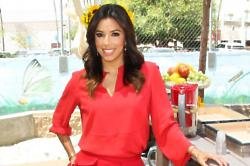