The end of The Umbrella Academy Season 2 left us on a major cliffhanger; here’s who will be causing some chaos in the Netflix original’s third season… 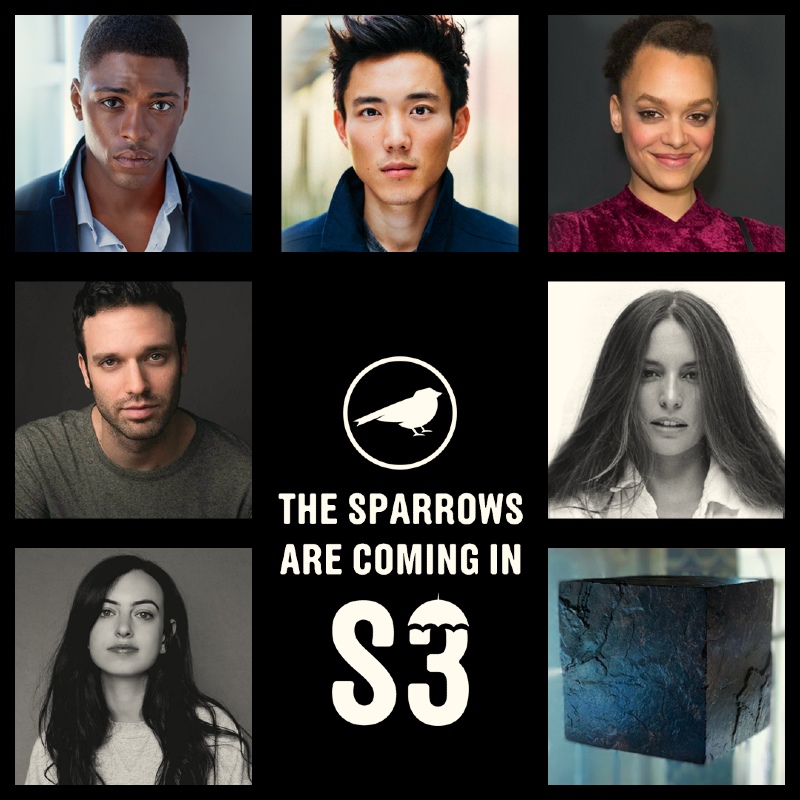 There was a lot going on in the second season of Netflix original series The Umbrella Academy, but nothing could have prepared us for what happened when the final episode of the season drew to a close.

Five (Aidan Gallagher) warned his family over and over again that using his powers to escape the 2019 apocalypse would be a major risk, but it was one they were all willing to take. The time jump left all of them scattered across the state of Texas, each in a unique part of a three-year period, starting in 1960.

With Swedish assassins on their tail, they eventually came together to once again stop the apocalypse, putting a stop to doomsday and using their powers to once again time jump… this time to an alternate reality.

That is where we’ll pick up in Season 3, as the siblings return to what was once The Umbrella Academy, only to find that there are seven other people there, in what is now called The Sparrow Academy.

Justin Cornwell plays Sparrow #1, Marcus. Described as a "charming, chiseled colossus", he's also said to be "honest, virtuous and demanding", as well as the glue that holds the family together.

Then there's Justin H. Min, who's back after the first two seasons, albeit in a completely different role as Sparrow #2, Ben. Known as a "Machiavellian tactician", he's "vicious, pragmatic and hyper-vigilant", determined to "gain his status as the leader at all costs." Certainly not the loving Ben we're used to!

Sparrow #3, Fei, is played by Britne Oldford. Happier alone than having to spend a second with another person, Fei enjoys isolation but deep down, "wishes she had a friend." Netflix tease: "Most of the time, Fei is the smartest person in the room and willing to work thigs out. But if you cross her there's no looking back because Fei won't stop until the job is done.”

Jake Epstein takes on the role of Alphonso, Sparrow #4. He's described as somebody who has spent years fighting crime and has the scars to prove it. "To compensate, Alphonso is armed with a caustic and biting sense of humour.” His idea of a good time is “a good pizza and a six-pack of beer.” Sounds like our sorta guy!

Sparrow #5, Sloane is played by Genesis Rodriguez. Hopeful to see a life outside of the Academy, she's a "romantic and a dreamer who feels a higher cosmic calling". Still, the obligations she holds to her family keep her stuck, but that doesn't mean she won't one day find the bravery to act on her plans.

Our penultimate Sparrow, Jayme, is played by Cazzie David, who's said to be "a loner hidden under a hoodie", who "doesn't say much because she doesn't have to". Described as possessing a "fear-inducing snarl", she's "smart and sharp as a knife", spending most of her time with her only friend, Alphonso.

Rounding out the seven Sparrows is… a cube. Well, an existential dread-inducing psykronium cube, called Christopher. Of unknown origin, he's able to turn the room freezing cold "and induce paralysing fear". He acts "as the Sparrows' consulted oracle who hands out incredible advice and serves as the family mediator". Fortunately, he's treated like any other sibling by his brothers and sisters. We can’t wait to see what he brings to the team.

The Umbrella Academy Season 3 starts production this February in Toronto. We'll bring you more news as and when we get it!

Seasons 1-2 of The Umbrella Academy are available exclusively to stream now on Netflix.

Millions of Netflix subscribers across the UK have been hit with a price rise of their subscription costs... READ MORE