We’ve all felt uneasy at times, being approached by a stranger in a deserted car park late at night or breaking down by the side of the road and having another car pull up next to you. These situations are few and far between, but they do happen. 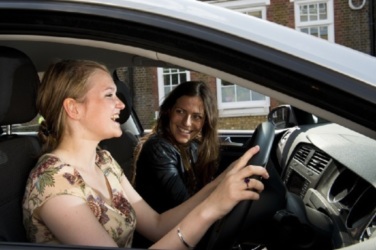 Practical instruction on personal awareness and self-protection, basic car maintenance and self-help will be top of the agenda and advice will be given on reducing the risks women face when driving for work or socially, including dealing with so-called  ‘road rage’ in other drivers.

This ‘Women in Gear’ event comes as new statistics reveal that the increase in road traffic in the UK - up by 50 per cent in the last two decades - is an important factor and this is set to rise by an alarming 100 per cent in the next 20 years (predicted by motoring experts).

In a survey of more than 3,000 UK motorists by YouGov for a well-known insurance company, it was revealed that nearly 1 in 10 (9%) have been threatened with physical violence and over half (56%) of drivers questioned agreed that road users are generally less courteous than five years ago.

Even more alarming was the revelation that over a fifth (21%) of road rage sufferers have argued with another motorist because of road rage, while 36% admitted it makes them drive more aggressively. Almost one in ten (8%) said they’ve followed another driver as a result.

Operations Director of Ashford Orbital commented: “Personal safety and security are imperative for everyone, particularly women today. The menace of aggressive, inconsiderate driving on our roads seems to be increasing at the moment and we believe that all it takes is a little care and consideration to avoid situations which can escalate into the kinds of tragic incidents we have all heard about recently.”

“We want them to enjoy their independence and freedom and be able to travel safely and confidently on our roads. We hope that by highlighting the risks facing women drivers, it will provide them with a wealth of information and practical advice,” he added.

In addition to car safety, the psychology behind car confidence will be explored by ex-Police Chief Inspector and human behaviour specialist Vic Botterill, with practical advice on defensive driving and combating the hazards of modern driving, including so-called ‘road rage’, which members of the audience can take part in. Advice will also be given about the frequent causes of aggressive, dangerous driving and ‘motorway madness’, with the audience encouraged to share their own experiences and how they could have been avoided with him.

But the course is not designed to encourage motorists to take the law into their own hands by becoming attackers themselves, emphasised Ray: “Our ‘Women in Gear’ evening is free to anyone who wishes to steer clear of trouble or be able to deal with their own, personal ‘road rage’. Judging from the response we are already receiving, we are expecting a lot of interest in this course,” he explained.

During the event, volunteers from the audience will be invited to take part in self-defence role-play by serving Police officer and self-protection specialist Andy Williams. They will be shown how to beat the bullies behind the wheel and, if diplomacy fails, how they can legally use everyday objects normally found about one’s person for personal self-protection and ensure a rapid escape from a would-be attacker.

Steph Savill, founder of FOXY Lady Drivers Club, will be on-hand to explain to interested visitors all about the award-winning motoring organisation’s support services for women drivers, including its female-friendly garage network.

Representatives from the Ashford branch of the Institute of Advanced Motorists will also be there to discuss their organisation’s various advanced driving courses with interested visitors.

Not many vehicles are equipped with full tool kits nowadays, so Ashford Orbital’s service technicians will also offer visitors practical hands-on instruction on dealing with roadside emergencies, routine car maintenance and car safety checks. The evening is free and all will be encouraged to roll up their sleeves and ‘have a go’ themselves under the guidance of expert motor technicians, promises the dealership. Gloves will be provided for hygiene purposes.

Anybody interested in attending the free Women in Gear event at Ashford Orbital on Thursday, November 6 can telephone Ray Kemp on 01233 504500 or e-mail: [email protected] to reserve places.