Author A G Slatter writes a piece for Female First upon the release of her new book All The Murmuring Bones.

So, I’m going to go a bit scattergun and cover merfolk in films, short stories and books – because I can. It’s just a sample of some of the mer tales out there for our entertainment, and it covers a fairly broad period of time. But these mermaids definitely are not ones to sing around singing, brushing their hair or mooning after weedy drowning princes. So, enjoy! 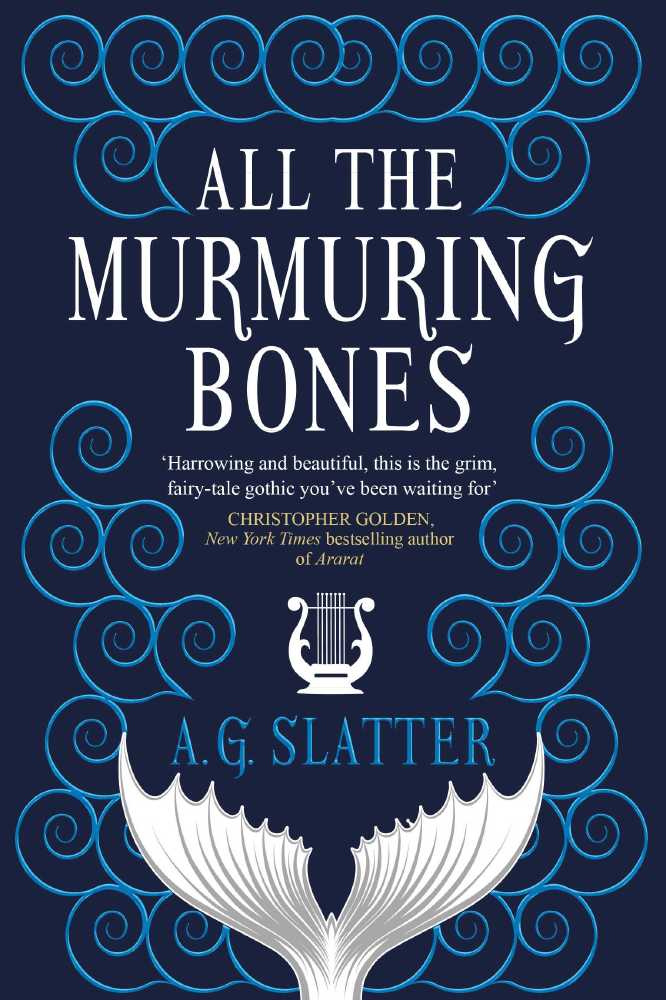 All The Murmuring Bones

1. Miranda. Okay, so she’s from a 1948 film and, despite unkind rumours, I’m not quite old enough to have watched it the first time around (or even the twentieth). It’s an old black and white film that I remember because she was probably my first mermaid who wasn’t that sappy “Little Mermaid”. I first saw it with my mother when I was little, and I loved Miranda because she was (a) a mermaid and (b) she knew she wanted more than to just sit around in the water or brushing her hair on a rock. Caught in a fisherman’s net, she blackmailed him into taking her for a trip to London. The important thing was that she got permission from the man’s wife first – sisterhood! Plus, a trip to London.

2. Yetu in The Deep, a novella by Rivers Solomon. Yetu is the historian for the ocean-dwelling wajinru, which means she holds all their memories, painful or otherwise, so the tribe are spared having to feel (except for once a year). She suppresses herself, her individuality and her desires, but she doesn’t feel she’s right for this role. It’s crushing her, so she commits a terrible act in the name of self-preservation, fleeing to the surface and leaving the wajinru in the grip of memories they’ve never dealt with. It is beautiful and sad and defiant and triumphant, and it’s also a love story.

3. Melusine wasn’t born a mermaid, but made into one by her mother’s curse (in short, don’t lock your father up in a mountain cavern even if you think it’ll make your mother happy). Melusine’s punishment was to once a week turn into either a serpent or a double-tailed mermaid (depending on who you’re talking to) from the waist down. The book where I found her breaking the mould was The Wandering Unicorn by Manuel Mujica Láinez, which is the tale of how she got her human body back after begging her mum. Mum, however, was a bit of a bitch, and gave Mel a guy’s body when she’d specifically wanted to be a girl to pursue a relationship with a handsome knight.

4. The Sea-Witch in “The Little Mermaid, in Passing”. This is my own short story and I specifically wrote it because I really dislike HCA’s “The Little Mermaid”. I’ve always thought the Sea-Witch was far more interesting, and I’d often wondered what her deal was. Then one day I realised: she’d become queen of the sea-witches through someone else’s treachery and she was very tired and annoyed. So, she’s making plans to retire in a pretty spectacular way …

5. The Wave Empress in Marjorie Liu’s graphic novel Monstress. She’s the Goddess of the Deep, a really, really big mer-queen. She’s kept her people safe during the wars, she’s terrifying and glorious. The awesome thing about Liu’s merfolk is that even though they can swim everywhere, they also have warships that they sail into battle. Warriors through and through, they can also perambulate on their tails (if you’ve seen the lamia in ESO Online? That’s how The Wave Empress and her sisters move).

6. Amos the Merman from Maria Lewis’ It Came from the Deep. If you’re like me, you hear Derek Zoolander saying “Merman!” every time you think the word. I’ve included Amos in this list because he’s not the main event in the novel, but he’s an excellent support act and love interest for protagonist and Gold Coast surf royalty Kaia Craig. Set on Australia’s Gold Coast, Kaia and Amos investigate murder, mad scientists, and general assorted weird goings-on around Lake Pelutz.

7. Tavia in Bethany C. Morrow’s gorgeous A Song Below Water. This is a beautiful YA fantasy, with Tavia and Effie as the only black girls at their school, and their lives are not easy. Effie’s family has literal demons to fight, and Tavia is a siren (and people are determined to keep her hidden). Set in an alternate version of Portland, Morrow uses mermaid mythology to explore racism, sexism, magic, family and friendship.

8. Amelia in Christina Henry’s historical fantasy The Mermaid. Showman PT Barnum was notorious for his travelling entertainment shows that featured the “Fiji Mermaid”, which was actually the top of a monkey sewn onto a fish’s bottom half. Henry’s book imagines what might happen if that mermaid were an actual mermaid. Amelia chose to come ashore and marry; latter, as a widow, she joins Barnum’s show – but finds nothing is as it seems or what she’d hoped for, yet she refuses to suffer in silence. Amelia is true to herself above all.

9. In Cassandra Khaw’s “And in Our Daughters, We Find a Voice”, a reworking of the original fairy tale, I finally found the Little Mermaid of my dreams. This mermaid princess bides her time, and has more spunk and determination and darkness than Hans Christian Andersen’s milksop ever did. A tale of the bond between sisters and mothers and daughters, and revenge. Gory and gracious, wild and elegant. It can be read online at The Dark Magazine.

10. Aycayia in Monique Roffey Costa Book of the Year, The Mermaid of Black Conch. Based on the Caribbean legend of Aycayia (or “Sweet Voice”), Roffey has modernised things a bit by setting it the 1970s. Aycayia – turned into a mermaid hundreds of years ago by the curses of jealous wives – is pulled ashore by a fisherman. She finds love in the world on land, but also unexpected dangers. A novel about disruption, freedom, possession and the risks of being different.

RELATED: It’s time for the next generation of ocean protectors by Mermaid Hannah Pearl

Over 70% of our world is water, there is no doubt we are a blue planet. At least half of Earth's oxygen comes from the ocean, and we are now starting to understand the impact of our plastic habits of the last century. Every day approximately 8 million pieces of plastic pollution find their way into our oceans – we’re slowly suffocating our own life source...