Every Easter Monday, in the village of Biddenden in Kent, a queue of elderly residents forms outside the old village workhouse, which has now been converted into residential property. At 10.00am prompt, the window of the workhouse opens and the head of the Biddenden Consolidated Charity distributes bread and cheese to the pensioners, just as they have been doing for over four hundred years. You won’t see this ceremony posted on social media, only mentioned in the Parish Magazine and advertised on the village noticeboard. But the ceremony still attracts a lot of onlookers, who can purchase a ‘Biddenden cake’. These cakes are made using a mould showing two women joined together and they are brick-hard and store well, but are almost inedible. This is all part of the folklore surrounding Eliza and Mary Chulkhurst, the Biddenden Maids, 12th-century conjoined twins born to a wealthy family. The two women lived to be 34 and left their land to charity when they died, and as a result of their bequest, this annual dole continues to this day. It is reckoned to be one of the oldest such doles in England. 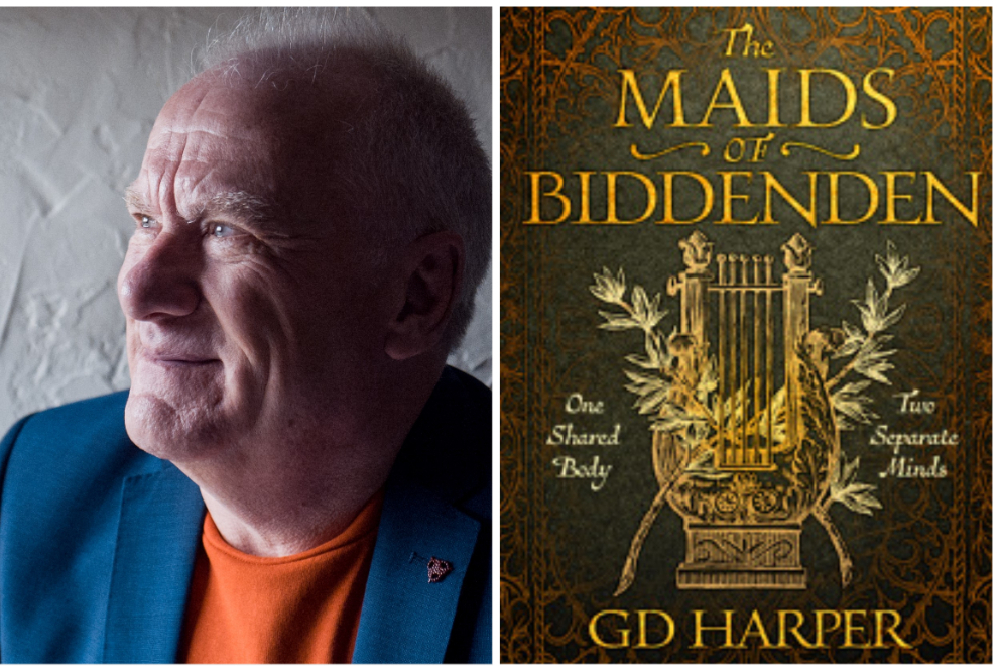 When you arrive in Biddenden, you are greeted by a village sign of the two women side-by-side and the same image is seen throughout the village. It is an astonishing story, and one that I always tell when I’m showing visitors around this beautiful part of Kent. But when I am asked specific questions about them, I realise how little factual information is known about Eliza and Mary. For a novelist, this is actually good news as I realised I had a largely blank canvas to describe a possible life for them.

That was the inspiration for me writing, The Maids of Biddenden, the imagined biography of Mary and Eliza. I used the real-life historical events and characters of the time to give a factual backcloth to the story and carefully researched what was known about rural life in Kent at that time and the places where the book is set; Malling, Maidstone, Tenterden, Ashford, Canterbury and, of course, Biddenden itself, and a beautiful map of 12th-century Kent was produced to illustrate the book. Writing a book about two women living in rural Kent allowed me to tell a fictional medieval history story that wasn’t about kings and queens, or knights and battles, and I set about creating two very different personalities for the Maids so that would be what drove the story— Eliza competitive and extroverted, a creative soul who writes songs and poems and plays the lyre; Mary quiet and shy, a caring healer who tend a physic garden to treat the sick and ailing of the village.

The other challenge of writing this book was to imagine what living a life as a conjoined twin would be like, what the physical and psychological implications are of being joined to another person. Here I consulted medical text books and non-fiction accounts of modern conjoined twins as well as reading the few novels where conjoined twins are the main characters. I thought this would be the limit of my understanding of conjoined twins, but sometimes life is stranger than fiction. I was doing a prelaunch book signing near the village, when someone came into the shop with a strange look in their eye and asked me to sign a book for a friend. When I asked who the friend was, I was told it was Jemimah, a separated conjoined twin, who by the most amazing coincidence now lives in the village of Biddenden itself.

Jemimah and I arranged to meet, and when I arrived at her house she was standing in a medieval physic garden she has recently restored, just like Mary the healer. She is a renowned artist whose previous ‘conjoinedness’ heavily influences her ideas, and her work is exhibited in museums and galleries all over the world, and so she also has Eliza’s creative spirit. A 21st-century Biddenden Maid! Jemimah enjoyed reading the book from her very unique perspective and kindly agreed to help me with the publicity, and I took some promotional photos of her and her twin, Sophie, when I was in Biddenden for the launch event.

I’ve been overwhelmed by the reception the book has had. The reviews have been very positive, but what has pleased me the most has been the reaction in Biddenden itself. Everyone has been so positive and supportive and I’ve had wonderful opportunities to talk about the book at various events around the village.

The story of Eliza and Mary deserves to reach the widest possible audience, not just because it is so astonishing in itself, but also because it is such a heart-warming and inspirational story of two remarkable women leading one joint life, challenging adversity to become the best they can be. I delighted to play some small part in doing this.