Author Jason Arnopp writes a piece for Female First upon the release of his new book The Last Days of Jack Sparks.

You can change careers and become an author. I started out as a freelance music journalist, interviewing rock bands around the world. I ended up editing a rock magazine, before realising that what I really wanted to do was tell stories for a living. Which is a mad ambition, but I went for it anyway. That was a painful but pivotal decision, and one which is only starting to pay off, many years later. But it can be done! You too can do it, if you're determined and foolish enough. I was once held at gunpoint by The Pope's security guards. During the rock journalism years, a photographer and I took a Satanic metal band called Cradle Of Filth to Vatican City in Rome for a photo shoot. We didn't have prior permission, and as a result found ourselves surrounded by extremely angry men toting submachine guns. It didn't help that the band members were modelling their own blasphemous T-shirts. It's one of those memories that was scary at the time, but now makes for a great go-to anecdote.

I don't hate social media. My novel The Last Days Of Jack Sparks might suggest I do, since it's about an ego-fuelled celebrity who practically lives on social media and comes badly unstuck (hence the title). Not to mention how the book suggests we're all broadcasting a little too much these days, and probably not listening enough to other people. The simple truth is, there's plenty of stuff I do like about social media - but that stuff just doesn't tend to make for a dramatic or scary story!

I've written Doctor Who. Yes, I previously wrote tie-in Who fiction for the BBC, including the audiobook Doctor Who: The Gemini Contagion that starred Matt Smith's Doctor. I've always loved Doctor Who and very much credit that show, or maybe blame it, for getting me into the darker side of fiction as a kid. I write on a regular basis for Doctor Who Magazine too, which I've also loved all my life.

I collect VHS movies. Yes, I have about two thousand of these things - films on video tapes, in the fat, chunky boxes that used to sit on the shelves of video shops, enticing people to rent them. Perhaps more than anything, I love the OTT lurid artwork, but I suppose I also like the way a big chunky video box makes a movie seem like more of a big deal. Collecting videos is great until it's time to move flat…

I believe scary stories play a positive role in society. Terrifying, chilling and/or horrific tales are the equivalent of ghost trains or rollercoasters. They're like dry runs for worst case scenarios. We get to face up to things that disturb and worry us, safe in the knowledge that we can close the book or switch off the e-reader at any time. It's good, vital even, to purge the bad stuff in our brains. And I'm really happy that lots of readers have said they've loved The Last Days Of Jack Sparks, even though they wouldn't normally gravitate towards this kind of book.

I'm not like Jack Sparks, honest! When I first met my wonderful publishers at Orbit Books, they admitted that they were trying hard not to accidentally call me Jack instead of Jason. They were probably also secretly worried that I might be an egotistical nightmare like Jack. I like to think I'm not, but I will confess that I found Jack worryingly easy to write. Authors do exist in a strange world of two extremes: we have to be confident enough to expect readers to absorb the 100,000 words we've laid down… but then we all go through phases where we firmly believe we don't know what we're doing and can't write to save our lives. So writing Jack gave me free rein to unleash the ego-driven side of being an author. Once again, it's all about the healthy purging. And as readers discover during the course of the novel, Jack does have a very different side to him. He's not all confidence, that's for sure…

I'm a born again veggie. I was vegetarian as a teenager, only to lapse in adult life, but a few years back my conscience returned. Food technology makes it all so much easier than it once was, back when veggie burgers were just vegetables shoved together, usually including sweetcorn. Quorn is a godsend, and I enjoy Tesco's Bacon Style Rashers as much as I used to enjoy bacon. Probably more, in fact, because there's no stringy fat to slice off. There's also a great indie company called Sgaia's Vegan Meats, who make awesome meat-free steaks. I aspire to be vegan one day, and have already made small changes, like switching to soy milk. Hooray!

I don't know if I believe in ghosts. Never saw one, but I do keep an open mind on the subject. That's another key theme of The Last Days Of Jack Sparks - trying not to cling too stubbornly to any kind of certainty. I don't know how I'd feel if I saw a ghost. On one hand I'd probably be terrified. But on the other, it would seem to suggest some kind of afterlife which would be great. One inherently positive thing about ghost stories, no matter how grim they might otherwise seem, is that their very format involves some kind of life after death. Anyway, let's lighten the tone…

I love living in Brighton. Moved down here six years ago from London, and my only regret is not having done it sooner. The only downside to Brighton life, far as I can see, is that it often feels like everyone else is on holiday while you're chained to your desk. By and large, people in Brighton seem happier than in other big UK cities. And so they should be, since they're by the sea and surrounded by a great array of bars. My favourite Brighton pub is The Basketmakers, which has old metal tins stuck to the walls, with handwritten notes inside. Even though I once opened one that said 'JASON YOU WILL DIE'. I swear, that really happened. It did. 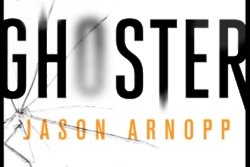