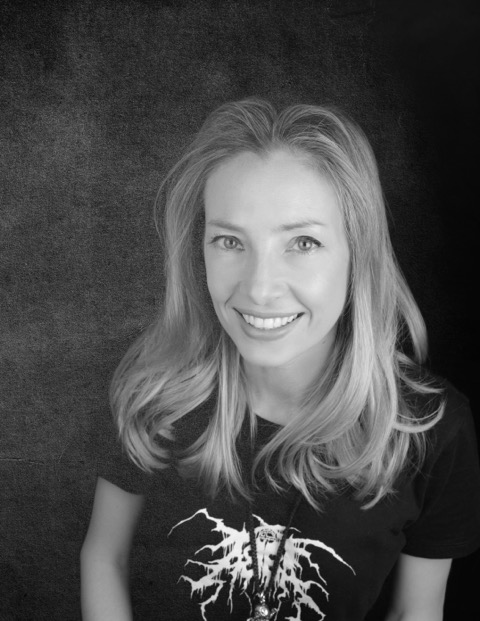 Catherine Fearns is the author of Amazon-bestselling crime thriller Reprobation. To celebrate the release of its sequel, Consuming Fire, here are a few facts Catherine had to share with us...

I became a metalhead in 2014. I describe it like a religious conversion, because heavy metal is in many ways like a religion. It’s certainly a way of life. I don’t know what the trigger was, but one day I was walking past the local guitar shop, newborn baby in a sling, and I just went in. I actually said the words ‘I want to play heavy metal please.’ And I went home that day with an electric guitar. I started going to underground metal gigs alone instead of mums’ nights out. Swapped my Boden floral dresses and gym gear for leather trousers and black t-shirts. And I started writing for extreme music websites. I haven’t looked back since. What began as a sort of early midlife crisis, possibly even an aspect of postnatal depression, resulted in a much happier person. And it also led to my becoming a writer.

I grew up in Crosby, Liverpool, and although work and marriage have taken me elsewhere, my heart remains in my home city. My family still live there and I visit as often as I can. Liverpudlians are so friendly, warm and funny, and the culture is so rich in history and music. I love everything about the place and I miss it every day. Setting my books in Liverpool felt very natural and has been a wonderful way to reconnect.

3. Reprobation was written entirely at night

My youngest daughter didn’t start school until this year, so daytimes were full. Plus I was too embarrassed to tell my husband I was writing a novel, so I didn’t write in the evenings either. I would wait until everyone was asleep and then sneak out of bed. Writing surreptitiously and in darkness definitely helped to capture the mood of the book.

4. Consuming Fire was written in McDonalds

Now I have time to myself during the day, and it would be nice to tell you that my second novel was written at an authorly desk surrounded by research, or in a romantic literary café.

But I’m afraid most of Consuming Fire was written in the McDonalds branch of my nearest indoor shopping centre. There’s something about that windowless, piped music, post-apocalyptic blandness that makes me focus. And the coffee is surprisingly good!

I have discovered that I do my best writing longhand. Although it takes longer, somehow it brings out a different way of thinking about words, of constructing sentences. Stepping away from the computer also means I can ignore emails and social media for a while. Twitter a lot of fun but dangerously addictive. So I have become a notebook aficionado. I found some wonderfully gothic leather-bound notebooks when I was in Venice recently, and I am filling them up with my third novel. Fortunately I am a very fast typist, so every evening I transcribe what I have written onto my laptop.

was a cocktail pianist at Harry Ramsden’s Fish and Chip Restaurant on the Liverpool docks. I was rubbish at it. I was 16 and wanted to sit quietly playing classical music and Beatles songs, but I would get heckled by drunk customers requesting Come On Eileen so they could sing along. It was so stressful! That was the beginning of the end of my piano career.

Two boys and two girls. It’s chaos but in the best possible way!

I play guitar and sing backing vocals. I absolutely love it; band practice is my favourite time of the week. But I’m definitely the weakest link in the band and I’m far too old to be in it - they are very kind to indulge me. Our drummer is 14 years old, to give you an idea. It’s a bit like School Of Rock!

9. Reprobation is inspired by the concept of pre-destination...

...the theological doctrine that God decided at the beginning of time who was destined for Heaven (the elect) and who was condemned to Hell (the reprobate). And crucially, that there’s nothing you can do in your lifetime to change your destiny. It is an idea that has always confused, fascinated and terrified me. And that has dogged me throughout my life. I have had a recurring dream about the gates of heaven and hell ever since I was five years old. I went to an Anglican school where we sung Protestant hymns every day and read the Pilgrim’s Progress. I studied Reformation history for my degree. And now I live in Geneva, the home of Calvinism. So I feel that it was my ‘destiny’ to write about it.

I have suffered from shyness all my life, but rather than embracing my introverted personality, I have always fought against it. I would love to be confident and sparkly. My strategy has been to routinely throw myself into public situations outside my comfort zone. I regularly say yes to doing ridiculous activities that I can barely cope with. This strategy has been a failure, in that it hasn’t made me any more extroverted whatsoever. But it does mean that I live in a permanent state of mild humiliation.

Reprobation is published by Crooked Cat Books. Available now from Amazon and selected bookstores. Consuming Fire was released today (February 6), and is currently available to order.