The Savannah has only one apex.

Yesterday (May 25th, 2022), Universal Pictures released the trailer for an all-new thriller which stars Luther and The Suicide Squad actor Idris Elba.

Beast will debut in cinemas this August (2022), and will see Elba attempt to survive one angry lion on the predator’s own territory.

More images and now a trailer have been released for the movie, generating more excitement for Elba’s newest project.

The 49-year-old actor stars as Doctor Nate Daniels, a recently-widowed father who returns to where he first met his late wife, South Africa, to a game reserve owned by an old family friend and wildlife biologist, Martin Battles (Sharlto Copley).

Nate brings his two daughters along, the eldest is Meredith (Iyana Halley) at 18, and the youngest is 13-year-old Norah (Leah Sava Jeffries).

However, the Daniels’ family trip turns ugly, as a monstrous lion, who is the victim of shallow poachers and sees all humans as the enemies, begins to follow their every move.

Monster movies always seem to generate a lot of interest, like the Godzilla and Kong movies that have come out in recent years, as well as the likes of Rampage (2018) and The Meg (2018).

However, many of them miss the mark in terms of thrills and impressive creatures. Beast focuses on the lion, not a monster in typical terms, but a menacing predator nonetheless. Can this film do for the lion what Jaws did for the shark?

The trailer begins in a fun, joyful way as Nate and his daughters arrive at Martin’s safari. There are shots of some of the area’s wildlife, such as giraffes and elephants, but things soon turn sour when the group find a wounded man on the trail.

It seems that the lion isn’t eating his prey, suggesting he is killing for sport in an act of revenge against humanity, the race that scarred him for life.

Beast appears to be sending a subtle message, that if you hurt the life around you, there will be consequences, and nature will fight back...

The trailer gives us glimpses of the beast itself, a proud, angry animal that just wants to be left alone, and will do anything to gain that privilege. 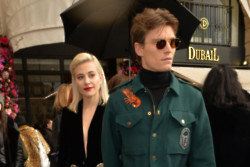