2016 has already been a great year for female filmmakers and there are plenty more to enjoy this summer - the schedule is packed with some really great filmmaking talent. 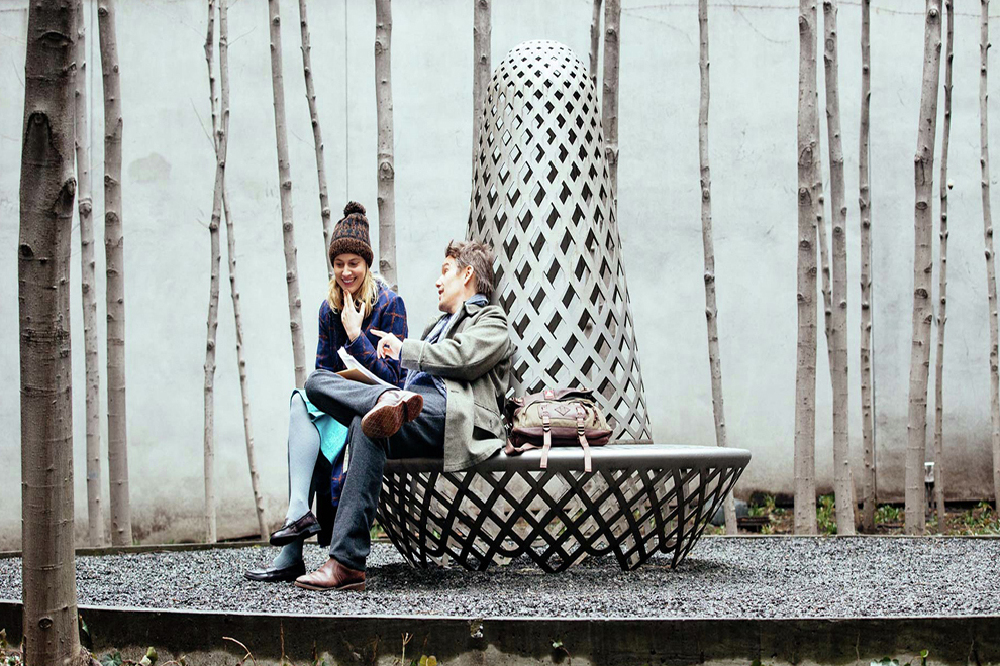 Rebecca Miller is back this week with her latest film Maggie's Plan and we take a look at some of the female directors who have exciting films hitting the big screen this summer.

Rachel Tunnard is one of the most exciting new directing talents around and she made her feature film directorial debut last month with Adult Life Skills.

Adult Life Skills is based on her Bafta-nominated short film Emotional Fusebox and is one of the best British films to hit the big screen so far this summer.

The movie sees Tunnard reunite with actress Jodie Whittaker, while Lorraine Ashbourne, Brett Goldstein, Rachael Deering, and Eileen Davies are also on board.

Anna is stuck: she's approaching 30, living like a hermit in her mum's garden shed and wondering why the suffragettes ever bothered. She spends her days making videos using her thumbs as actors - thumbs that bicker about things like whether Yogi Bear is a moral or existential nihilist. But Anna doesn't show these videos to anyone and no one knows what they are for.

A week before her birthday her Mum serves her an ultimatum - she needs to move out of the shed, get a haircut that doesn't put her gender in question and stop dressing like a homeless teenager. Naturally, Anna tells her Mum to BACK THE F-OFF.

However, when her school friend comes to visit, Anna's self-imposed isolation becomes impossible to maintain. Soon she is entangled with a troubled eight-year-old boy obsessed with Westerns, and the local estate agent whose awkward interpersonal skills continually undermine his attempts to seduce her.

The movie won over critics and audiences on the festival circuit and Tunnard went on to win the Nora Ephron prize for best female director at the Tribeca Film Festival. I really cannot wait to see what she delivers next.

Adult Life Skills is out now.

Liza Johnson has also been winning praise for her work on Elvis & Nixon, which is the fourth feature film of her directing career to date. She has already brought us films such as Fernweh - The Opposite of Homesick, Return, and Hateship Loveship and is great to see her back at the helm.

The movie saw Johnson work with both Michael Shannon and Kevin Spacey for the first time as the actors took on the title roles of Elvis Presley and President Nixon.

For me, it is the central performances of these two great actors that really elevate this film - their performances alone are worth the price of the cinema ticket.

There is a lack of factual material behind this true story - simply because no one was there to witness the conversation between these two iconic figures. However, Johnson has overcome this lack of substance with some truly terrific humour and is happy to play on the absurdity of this meeting.

On the morning of December 21st, 1970 the world's biggest star, Elvis Presley (Shannon) arrived on the White House lawn to request a meeting with the most powerful man in the world, President Richard Nixon (Spacey). Elvis & Nixon tells the astounding true story of this meeting between two men at the height of their powers.

Elvis & Nixon is out now.

Absolutely Fabulous is one of the most iconic British television series and now Eddy and Patsy have come to the big screen for the first time this summer.

Yes, Absolutely Fabulous: The Movie has been released and it has already had the most successful opening weekend of any British film since the release of Spectre last year.

The movie sees Mandie Fletcher back in the director's chair for what is her first cinema film since Deadly Advice back in 1994.

However, Fletcher is no stranger to the world of Ab Fab, having directed some episodes of the television series. She has also worked on the likes of Miranda, Blandings, and Stella in recent years.

Saunders and Joanna Lumley are not the only familiar faces on the cast list as Julia Sawalha, Jane Horrocks, and June Whitfield are back as Saffy, Bubble, and Mother. As you would expect, a whole host of celebs have lined up to appear as Kate Moss, Lulu, Rebel Wilson, and Gwendoline Christie are all on board.

Edina Monsoon and Patsy Stone, still oozing glitz and glamour, living the high life they are accustomed to: shopping, drinking and clubbing their way around London's trendiest hotspots. But when they accidentally push Kate Moss into the River Thames at a über-fashionable launch party, Eddy and Patsy become entangled in a media storm surrounding the supermodel's untimely demise and are relentlessly pursued by the paparazzi.

Fleeing penniless to the glamorous playground of the super-rich, the French Riviera, they hatch a plan to make their escape permanent and live the high life forever more!

Ab Fab has been on general release since Friday and grossed £4.042 million at the UK box office; opening at number two behind The Secret Life of Pets. It already looks on course to be one of the most successful British movies of the summer.

Absolutely Fabulous: The Movie is out now.

Rebecca Miller is one of the female filmmakers to watch out for this week as she returns to the director's chair with her new relationship drama Maggie's Plan.

Miller has brought us movies such as The Ballad of Jack and Rose and Personal Velocity during her career and Maggie's Plan is her first feature since The Private Lives of Pippa Lee back in 2009.

As well as being in the director's chair, Miller has also penned the screenplay, which is based on the original story by Karen Rinaldi.

As well as being a film that is written and directed by a woman, Greta Gerwig takes on the title role in a story that is driven by a major female character. Gerwig is one of the most exciting actresses around and this is her first collaboration with Miller.

Maggie is a vibrant and practical thirty-something New Yorker working at the New School who, without success in finding love, who decides now is the time to have a child on her own. But when she meets John Harding (Hawke) a 'ficto-critical anthropologist' and struggling novelist, Maggie falls in love for the first time, and adjusts her plans for motherhood. Complicating matters, John is in a strained marriage with a brilliant Danish academic, Georgette Nørgaard (Moore).

With a Greek chorus of Maggie's eccentric and hilarious best friends Tony and Felicia (Hader and Rudolph) observing wryly from the sidelines, Maggie sets into motion a new plan that catapults her into a nervy love triangle with John and Georgette; intertwining their lives and connecting them in surprising and the humorous new ways. Maggie learns that sometimes destiny should be left to its own devices.

Maggie's Plan has been charming audiences on the festival circuit and is a welcome break from all of the blockbusters of recent weeks.

Catherine Corsini is back in the director's chair this July with the perfectly titled Summertime - La belle saison.

Corsini is one of the most talented French directors and has already brought us films such as Leaving, and Lovers during her career. I don't know about you, but I am excited to see her back with Summertime.

If you love your indie film, Summertime is set to be a film that's not to be missed as Corsini has also teamed up with Laurette Polmanss to pen the film's screenplay.

Cécile de France and Izïa Higelin take on the central roles of Carole and Delphine and are joined on the cast list by Noémie Lvovsky, Kévin Azaïs, and Laetitia Dosch.

1971. Delphine (Higelin), a twenty-something girl of humble means, takes a huge step by packing up and moving to Paris, searching for independence and a life beyond the duties of her rural upbringing, It's not long before she is drawn to dynamic thirty-something Carole (de France), who is actively involved in the emerging feminist movement.

Carole lives with her boyfriend, but the two women quickly fall head over heels and become inseparable, Their bliss is interrupted, however, when a family emergency forces Delphine back to the farm and her mother (Lvovsky), and Carole decides to follow her. There, the couple has to face a far different reality.

Summertime premiered at the Locarno International Film Festival, where it won the Variety Piazza Grande Award.

Chevalier is another foreign film to watch out for this summer as Athina Rachel Tsangari is back in the director's chair.

Chevalier is the third feature film of Tsangari's career and comes after The Slow Business of Going and Attenberg; the latter was released back in 2010.

As well as being in the director's chair, Tsangari has teamed up with Efthymis Filippou to pen the film's screenplay.

In the middle of the Aegean Sea, on a luxury yacht, six men on a fishing trip decide to play a game. During this game, things will be compared. Things will be measured. Songs will be butchered, and blood will be tested.

Friends will become rivals, and rivals will become hungry. But at the end of the voyage when the game is over, the man who wins will be the best man. And he will wear upon his littlest finger the victorious signet ring: the 'Chevalier'.

Chevalier was one of the most talked about movies of last year's BFI London Film Festival as it went on to win the Best Film Award.

July is going to be another great month for indie film and Chevalier is another of the film's in this genre that's not to be missed.

If you are looking for a family movie to enjoy this summer... look no further than the upcoming adaptation of Swallows and Amazons.

Swallows and Amazons is based on the children's novel of the same name by Arthur Ransome and has been adapted into a screenplay by Andrea Gibb.

Rafe Spall, Andrew Scott, Kelly Macdonald, Jessica Hynes, and Harry Enfield are some of the names on an exciting cast list, which is a mix of established stars and up and coming acting talent.

Swallows And Amazons follows four children dreaming of escape from the tedium of a summer holiday in the Lake District with their mother. When finally given permission to camp on their own on a remote island in the middle of a vast lake, they are overjoyed. But when they get there they discover they may not be alone...

As a desperate battle for ownership of the island ensues, the real dangers of an adult world on the brink of war encroach on their paradise in the form of a mysterious pair of Russian spies hot on the tail of the enigmatic Jim Turner. As the sleepy British summer is turned on its head, the children must learn skills of survival, responsibility, and the all-important value of friendship.

Swallows and Amazons is a treasured classic and I cannot wait to see how it translates on the big screen. It looks set to be a film that the family cannot miss. 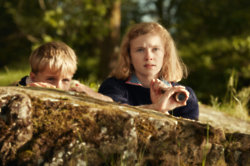 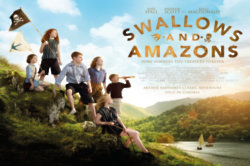 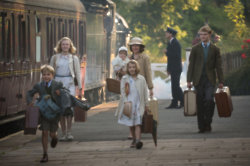 Check Out Another Swallows and Amazons Clip