Marina and the Diamonds Chat To FemaleFirst

Marina and the Diamonds

Marina Diamandis is the new singer/songwriter who is going to be a massive pop starlet this autumn… This summer she has been working hard, performing at festivals and recording songs for her new album. FemaleFirst caught up with her at the launch of her EP in Farringdon, London to find out a little bit more about this Welsh/Greek beauty.

With a mane of black hair, berry stained pout and huge black eyes; she has a husky welsh accent and a very dirty laugh. Born with a Greek dad and a Welsh mum, Marina spent her childhood moving between the two countries.

There is something hypnotic and yearning about her songs. They are about boys and break-ups and love, and Ms Diamond has a deep, very sensual voice. She sounds a lot like Gwen Stefani and she does a cover of Tick Tock Tick Tock in her set, but she somehow makes it sound more elemental and vital.

As a songwriter her lyrics come from experiences; “I’m not like a huge music fan.” she says; “Well I am a music fan but I don’t know a lot about music just because my parents weren’t’t very like, rock people (does a devil horns sign) or anything like that, but my mum used to listen to Dolly Parton a lot and Annie Lennox and the Eurythmics and I think that subconsciously filtered through.”

“On my own I guess I listen to PJ Harvey, I like Daniel Johnson, No Doubt and Britney. You know how musicians listen to a record to get inspiration – I’ve never done that.”

So far Mowgli’s Road, I am Not a Robot and Obsessions are the stand out tracks. She just shot the video for Obsessions with none other than celebrity photographer Rankin, How important the visual theatrical element of performing to you?

“I think the visual thing is really important and it’s going to get a lot better. I will be having some stage props made soon. I’m thinking big plastic diamonds but we’ll see.”

Your costumes go from trapeze artists gold-sequined leotards to ice-skater dresses with rodeo cow-girl fringed leather jackets, who makes them?

“I do. I usually go to Beyond Retro or charity shops and then I stick stuff on them or I’ll like sew little bits together and yeah and just have fun with it.”

Today she is wearing a black dress with a handmade belt i.e. a black belt she has embellished with a royal orb buckle a la Vivienne Westwood – if VW dealt in poster painted plastic. She has also stuck red plastic glitter stars onto her tights in small clusters.

She might be a doll but don’t get too close - Marina is feisty, she, nearly, punched someone who lunged at her once she was performing. “I… no… I clipped his jaw. I did try though I was so annoyed. I did the typically girlie aim – bleugh.”  Did he get the hint? “No he was on drugs so he didn’t’t get it but I was really annoyed.”

Which leads me neatly to the final question; if you could have any super power what would it be?

“Oh probably something really pervy like seeing through walls.” She cackles wickedly, with a huge grin on her face. “Yeah then I could see through walls… into the men’s toilets hahahahaha!”

Tagged in Marina and the Diamonds 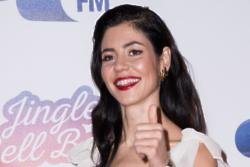 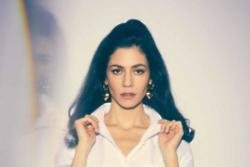 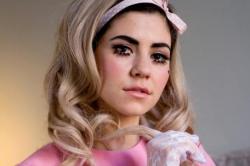 Marina and the Diamonds to release new music in January