If it feels too soon since the last Met Gala, you’d be right. Despite the 2021 event being held in September, 2022’s edition of this fashion-forward event has already arrived. This year’s theme is In America, An Anthology of Fashion with the dress code “Gilded Glamor”, and - as usual - A listers took to the red carpet at the Metropolitan Museum of Art in New York to show off their unique looks: From the breathtakingly beautiful to the bafflingly bizarre… 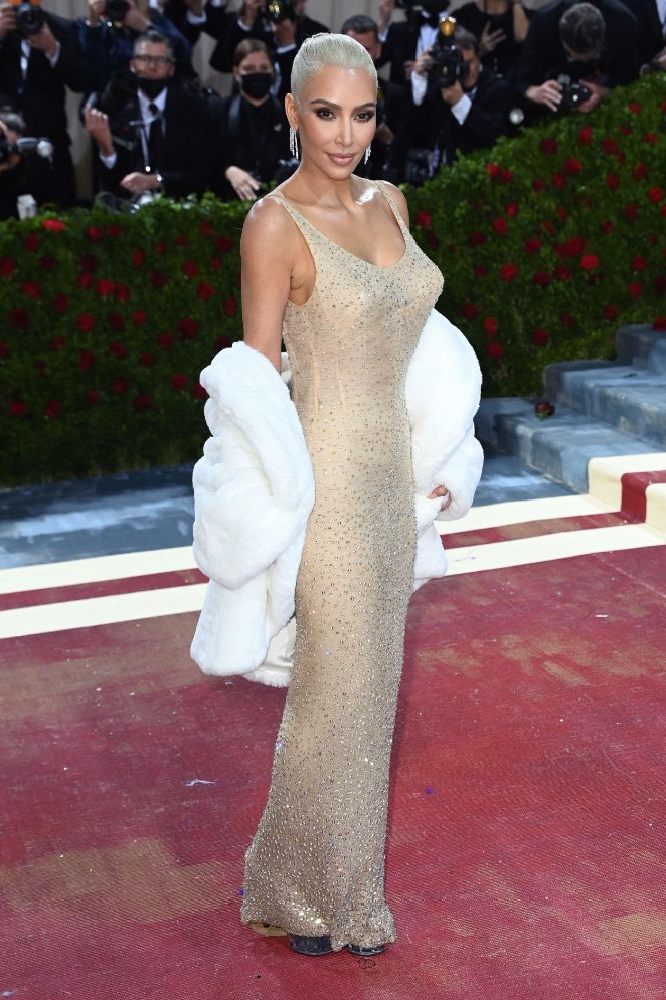 While the reality star is sometimes one to push the boat out, her look was beautiful in its simplicity. On closer inspection though, you might notice that she is actually wearing the ultimate vintage gown; the crystal-embellished, Jean Louis-designed piece last worn by none other than Marilyn Monroe 60 years ago when she sang Happy Birthday, Mr. President to John F. Kennedy.

The dress is the most expensive ever sold at auction, taking a massive $4.8 million in 2016. It usually lives at Ripley’s Believe It Or Not Museum in Orlando, Florida, but was allegedly transported to Kim’s home in Calabasas, California accompanied by actual guards.

Kim revealed she had to lose 16 pounds in less than a month to fit into it, but it was totally worth it. The best-dressed of the Kardashian-Jenner clan for sure.

The Pam and Tommy actress wore a daring backless Atelier Versace gown strewn with strings of beads that looked frankly dangerous - one would definitely be sure to stay sober in something so bejeweled! She teamed the look with some gun-metal peep-toe heels, glittering silver eyeshadow and dangly silver earrings. Gilded glamor: Check!

If there’s one way you can guarantee a unique, memortable look, it’s by bringing a flute to the red carpet. Lizzo serenaded the paparazzi as she modeled a black Thom Browne corset dress and a huge, stunning coat embellished with golden leaves and flowers which the popstar claimed took 22,000 hours to hand-bead.

We never know what to expect from Billie (apart from the fact that she’ll always be in Gucci), but we always know she certainly won’t disappoint. Her favorite designer clothed her in a duchesse satin Victorian-inspired gown in ivory and mint, tightly corseted with a modest bustle and long lace sleeves. As usual, Billie managed to make it look rather gothic thanks to the black jeweled choker and her black hair in a stylish up-do, her simple make-up set off by a lick of winged liquid liner.

The most important thing to note, however, is that it was made completely from upcycled materials. Billie admitted she wanted to be “as eco-friendly as possible”; even her shoes were made from vegan materials.

My ultimate lesbian fantasy arrived on the Met Gala 2022 red carpet in the form of Russian model Irina Shayk, clad pretty much head to toe in leather Burberry. The grunge look included biker pants and jacket, leather shirt and tie, leather corset and gloves and huge black hoop earrings. There was nothing “gilded glamor” about this look but Irina looked so hot that we literally did not care. She maintained a moody expression with the odd hint of a smoldering side smile as we fell madly in love.

Also in pants this year was Cara Delevingne; and that’s literally all she was wearing once she’d taken off the matching red, Christian Dior, circus-style suit jacket. Instead, she had her entire torso and feet painted gold with only a couple of nipple pasties and a gold body chain bedecked in butterflies covering her modesty. She also wore some striking glitter eyeshadow and carried a cane with a golden handle - which is actually a genius power move when you’re wearing sky-high heels.

We just love an outfit that makes us go “Ooooooh!” and Olivia Rodrigo’s lavender Versace gown seriously did the trick. She paired old-style Hollywood glamor with fairy fantasy in a cowl-necked sequined dress with sheer gloves, leaving her long hair down in loose waves with purple butterfly wings poking out at ear and chin height. Just call her Queen Mab!

Supermodel Winnie Harlow was a Beltane beauty in a Iris van Herpen couture gown that looked like a huge flower with a tribal root design at the centre. Her crystal headpiece was the star of the show, though we still haven’t worked out quite what it’s supposed to look like. It kind of looked like a dozen spindly white crabs’ legs, but it was still unforgettably stunning.

Serving female Prince Charming was Chloë Grace Moretz in a glittering silver Louis Vuitton overcoat with white pants and a loose white tie. Her hair was styled in a kind of faux pixie cut with the main length tied in a conservative low ponytail. She opted for a masculine vibe much like Irina Shayk and Cara Delevingne, but she truly stuck to this year’s fashion theme.

The Empire State of Mind hitmaker paid homage to her home city in a Ralph Lauren cape that glittered with the New York skyline, adorned with 200,000 hand-placed crystals to match her gown. Her hair was wrapped in a thin ponytail with black and silver disks attached along it, and she accessorized with Tiffany & Co. diamonds. Literally, the goddess of the Big Apple.

Veteran British model Kate Moss was careful not to upstage her daughter as she opted for a modest black coat dress; though as she’s done her entire career, she’s made a simple look into a head-turning masterpiece just by being in it. Both she and her 19-year-old daughter wore Burberry, but Lila’s look was rather more striking with a sheer, nude dress adorned in silver appliques.

“Gilded” was the word for Cardi B’s Met Gala look. Dripping in gold, the rap queen wore a Versace gown and a lot of over-the-top gold-chain jewelry. She looked like the contents of a pirate’s treasure chest; her whole look screamed “Money!”.

Unrecognizable with her 1920s- style slicked curls that we’re not 100% sure are real, and completed concealed eyebrows, Maisie Williams opted for a huge black Thom Browne dress that was open at the top revealing a simple white corset beneath. The winged eyeliner and bleached eyebrows could have been a nod to Maisie’s forthcoming role as punk icon Jordan Mooney in the new series Pistol.

It seems enormous quilt-style robes are still very much in vogue right now, with Gigi Hadid pairing her voluminous Versace number with a sexy latex jumpsuit and a matching underbust corset. Her blond hair was pulled into a tight up-do with oriental flicks, and her lipstick and necklace matched the rest of her outfit seamlessly.