The Wayne Rooney Effect: Majority of men seek treatment for hair loss before 35

Wayne Rooney famously went under the knife for a new head of hair at just 25, and it seems that more and more men are following suit.

A survey of 8,617 people has shown that the majority of men seek treatment for hair loss before they reach 35 – knocking any notion that baldness is a condition for the elderly.

The data taken from HealthExpress, the UK’s first online clinic, analyses how many men came to them in the last year for a diagnosis of their hair loss, and it was men under 35 who made up the most enquires.

Dr Hilary Jones, a medical adviser to HealthExpress comments: “Traditionally it would be men of an older age seeking help for hair loss but we are seeing more and more young men asking for advice when they lose their hair.

“Losing hair at a young age is not a new phenomenon, in fact the NHS suggests that up to 25 per cent of men lose their hair by the age of 30, but it has been the wave of young celebrities, such as Wayne Rooney, that have made men aware that there are treatments out there.

“I would suggest anybody concerned about hair loss consults a GP or pharmacy to discuss the range of options available to them.”

There were also spikes to when the younger generation would seek treatment; most men were treated for hair loss at the ages of 27, 30 and 31. This is in comparison to just 1 per cent of men looking for hair loss treatments at the age of 50.

The release of data from HealthExpress(www.healthexpress.co.uk) comes after a wave of high profile men have openly spoken about their hair loss in the media, including Wayne Rooney and Calum Best. 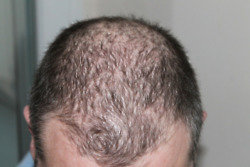