Yesterday (April 12th, 2022), Starzplay, an international streaming service, announced that a second season of a popular, critically acclaimed series is coming back.

Season 2 of P-Valley will be heading to Starzplay later this year (2022). The trailer for the upcoming TV show was released recently, giving fans an idea of what the next chapter of the story will contain.

P-Valley is a complex story of a ‘little-strip-club-that-could', located in America’s Mississippi Delta; the show also introduces audiences to the big names the come in and out of the establishment’s doors.

The Season 1 finale of P-Valley debuted in September of 2020, so it’s been quite a while since fans of the show had access to any new content. This June, however, viewers can enter the Pynk club once again.

The upcoming season brings audiences even further into the lives of Pynk’s beloved characters as Chucalissa City becomes shrouded in darkness.

Fans can expect to see a new side of the Pynk club as it struggles to remain open during a pandemic, a war for the throne begins, and new faces causing chaos in the locker room.

Season 2 will see many familiar faces return, such as Nicco Annan (This is Us) as Uncle Clifford, Elarica Johnson (Harry Potter and the Half-Blood Prince) as Autumn Night, Brandee Evans (The Bobby Brown Story) as Mercedes, Shannon Thornton (Power) as Miss Mississippi, with J. Alphonse Nicholson (Chicago P.D.) as Lil’ Murda, and Parker Sawyers (Southside With You) as Andre.

Recurring guest stars this season include John Clarence Stewart (Zoey’s Extraordinary Playlist, What If) as Big Teak, newcomer Miracle Watts as Big Bone, Shamika Cotton (The Wire) as Farrah and Gail Bean (Snowfall) as Roulette. Psalms Salazar (Girl Lost: A Hollywood Thriller) will also be joining the cast this season as Whisper.

Season 2 of P-Valley will debut on Starzplay on June 3rd, 2022, with new episodes releasing every Sunday. 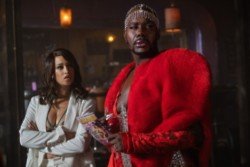 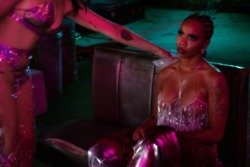 P-Valley Season 2: Brandee Evans says she felt like Mercedes ‘was her’ [EXCLUSIVE] 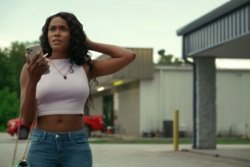 P-Valley Season 2: Shannon Thornton on 'falling in love' with her character Keyshawn [EXCLUSIVE]