An official release date has been given.

Groundbreaking British series Queer as Folk has been rebooted and reimagined in a new show that is set to make its debut on streaming platform Starzplay, both in the UK and international territories across July 2022.

The eight-episode series will premiere across the UK on Friday, July 1st, with other local premieres rolling out exclusively in Belgium, Brazil, France, Germany, Italy, Latin America, Luxembourg, Spain, Netherlands and the Nordics on Sunday, July 31st.

With two new episodes coming out every week until the season’s conclusion, it’s going to be a must-watch for both old fans of the original series, as well as newcomers who can’t get enough of queer culture.

Stephen Dunn has worked on this reimagining of Russell T. Davies' original, exploring a diverse group of friends with the backdrop of New Orleans. In the aftermath of a tragedy, their lives are changed forever.

Devin Way leads the cast as Brodie, with Fin Argus as Mingus, Jesse James Keitel as Ruthie, CG as Shar, Johnny Sibilly as Noah and, Ryan O'Connell as Julian. O'Connell also writes and serves as co-executive producer on the series.

As a gay man who has never watched the original Queer as Folk series (almost criminal, I know!), I am excited to see just how Davies’ story has been reimagined for a modern audience, set in America. I am also more than ever looking forward to going back and watching the original show – hopefully before this new one makes its debut!

Some incredible talents have come together to form the cast, and it’s obvious we’re going to be treated to some standout, groundbreaking performances. I can’t wait to check it out.

Queer as Folk premieres on Starzplay on July 1st 2022 in the UK, hitting international territories on July 31st, 2022.

RELATED: New Doctor Who: Reaction to Ncuti Gatwa casting shows excitement and, that some need to grow up 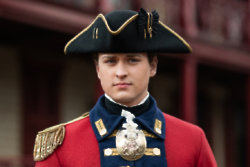