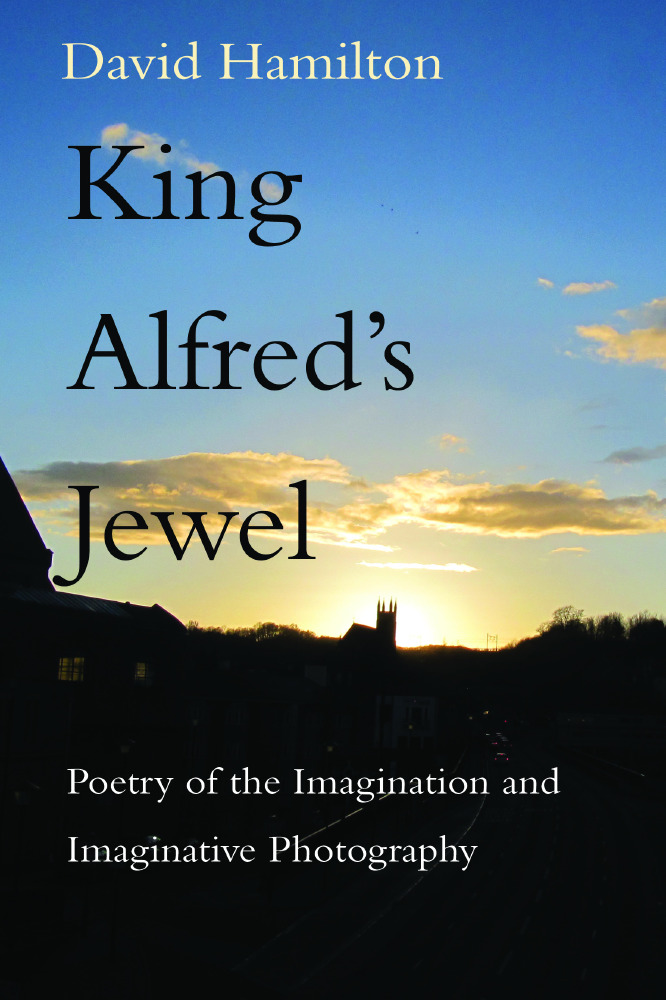 The title poem, King Alfred's Jewel, is a journey in search of something lacking inside. On the journey the subject goes through a tunnel like the underworld of classical literature but to modern psychologists is the unconscious. I used it to try to describe the Dark Night of the Soul from inside.  This notion was originally described by St. John of the Cross. In this I use poetic imagery but it is meant to help the many people who suffer depression. It tries to show that if you come through the other side happier times can be waiting. There is a debate about the difference between depression and the Dark Night, which is seen as a spiritual experience not something pathological.

There is also a dramatic monologue called “Wolfshead” which was the name for an outlaw or an outlaw’s lair where outlaws congregated. It is lighter than Dark Night and I hope enjoyable to read.  Most of us are fascinated by outlaw stories and this has several as it is a group of deceased outlaws who return to tell their legendary stories on a May eve in Sherwood Forest with Robin Hood presiding. They relate the legendary tales associated with themselves and in cases where there is a record of their real lives tell that story which is a contrast.

How much has your background in journalism helped you write this book?

“Wolfshead” began as an investigation into outlaws and their historical lives. My experiences in journalism affected the original research into Wild Humphrey Kynaston at local libraries and in the Public Records Office in Kew because I approached it as an investigative journalist tracing the real story of an outlaw. A resulting essay was published in the New English Review of June 2011 as “Pursuing An Outlaw – The Real Wild Humphrey Kynaston”.  My experiences in “Sales” help because the writing is creative, but after is pitching and selling the product.

You have studied English Literature – who are your favourite writers from this experience?

My favourite writers are poets and dramatists. I used to read the greats like Shakespeare, Milton, Tennyson but now I listen to the spoken versions of plays and poems on Naxos and I watch a lot of films and television adaptations of famous novels and plays on DVD. I am a big fan of Classic Hollywood and my favourite actors are Edward G Robinson and Humphrey Bogart who could really act and carried their films without CGI to carry them. I prefer poetry that is not obscure but accessible to readers with a good story to tell. Twentieth-century poets tried to be too clever for their readers.

Which legends inspired your writing?

Wild Humphrey Kynaston inspired me in more than just this book and I spent a great deal of time researching him. I have been interested in the romantic tales of outlaws like Robin Hood and Dick Turpin and the Western ones like Jesse James since I was young. The romantic idea that they “Robbed the rich to give to the poor” is a nice thought but fantasy. When I began researching Wild Humphrey Kynaston I realised the legends are very similar in events and the benevolent nature attributed to the outlaw but their real stories are different and much more exciting. Kynaston's legend comprises the usual tales of giving money to the poor and indeed he might have on occasion as there are examples of even Al Capone helping people out and you hear romantic stories of the Krays now.

But there was much more to it than that and like others Kynaston was a gang leader with close family as nucleus of the gang. He led several raids on Oswestry Castle and other properties of Lord Arundel. In fact he and his followers were described as dressed in “white harness” which was the colour of the Duke of York and suggests he was continuing the Wars of the Roses in his active period between 1485 and 1515. Like The Folvilles he was pardoned by the king for fighting in the royal army.

Other outlaws who return and tell their stories are Fulk Fitzwarrin III, Wild Edric, The Folvilles, The Cotrels, Tom Faggus who was used as a character in Lorna Doon and Dick Turpin, who was ruthless in real life not dashing and romantic.

How challenging was it to combine both poetry and a dramatic monologue in the book?

Strangely, it was not challenging but a solution because in “Wolfshead”, the Dramatic Monologue, I had several characters but did not want to write a play for a book of poems. A Dramatic Monologue was the answer as it has characters talking but without stage directions or much movement. I have never enjoyed Robert Browning's Dramatic Monologues so I only read small passages to get an idea of how the monologues are delivered. However, I find Tennyson's monologues very enjoyable and listened to some on CD. I am thinking of writing Wolfshead as a film script in the near future.

When did your passion for photography begin?

I really wanted to learn to draw but don't have the patience and took the easier road and bought a camera. That was about eight years ago and I have tried to develop a style of photography that appears to be black and white but on closer study has spots of colour. I think of it as part chiaroscuro. I also do explosions of colour out of the dark shot. This is taking city or townscapes at night when the shop, street and car lights cause a mass of colour especially if the ground is wet and it reflects along the street.

When did you realise that you could combine photography with your writing?

My favourite book is In The March And Borderland Of Wales: Shropshire, Herefordshire and Monmouth (1911) by Edwardian scholar A.G. Bradley. He relates a cycling trip along my beloved Shropshire-Welsh border, the Marche and it was illustrated by line drawings. I wanted to illustrate the title poem of my book with photographs but as the subjects are not realism I decided photographs being realistic would spoil it for the readers who have their own images of people and places. However, when my publisher Troubador told me I could have a section of colour plates I was elated. I have previously illustrated my essays for the New English Review with my own photographs.

My next book is to be a collection of short epic poems rooted in tradition and history but appropriate for modern readers. They are stories with mythological elements and shorter than the long epics of Homer, Virgil and Dante and more accessible. I also have a book on my travels round England in mind, which will be copiously illustrated with photographs as it is realism.