Remarkable Restraint came to life when I had an idea for a scene where one friend literally ties his best mate down in order to get some answers from him…and sparks ignite. However, because of timing issues, the huge change their relationship had been thrust into wouldn't find any sort of resolution before they were separated for a long time. And that was the double meaning of the 'restraint' in the title-the patience to make the time apart work for them instead of against them, if only they're able to find the strength. 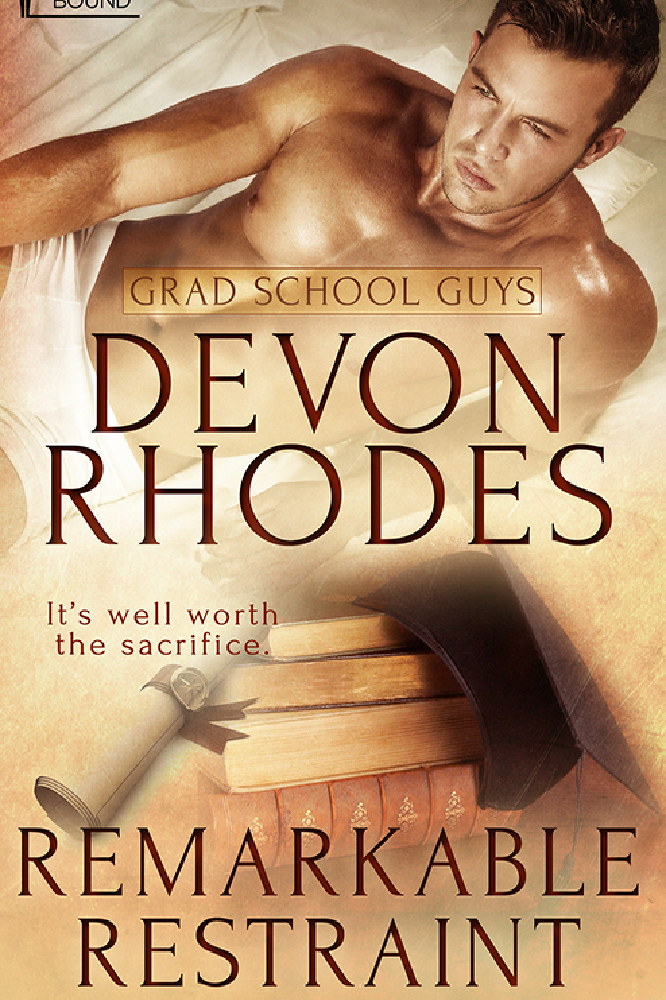 There's something fun about putting two long-time friends together. Maybe they met early enough in their lives that attraction wasn't a part of things. Or perhaps one of them feels strongly for the other…who has no idea what their friend is hiding. Sometimes one of them has a penchant for something a bit different and doesn't know whether the other person will accept it. I managed to tie all of these into this book about Chaz and Justin going from roommates to more, set in that volatile time of university years when young people are trying to figure out who they are.

When Justin gets fed up with his best friend Chaz avoiding him, he decides it's well worth sacrificing his favorite T-shirt to try to save their relationship.

Chaz is finding it impossible to hide his attraction for his straight roommate, so he tries avoiding Justin until he leaves for the summer. He just has to get through a few more days, then he'll be home free-at least until Justin comes back in a couple of months. Still, he firmly believes that space between them is the best answer for now.

But Justin is not a man to be ignored. He's known Chaz for almost a decade, and can tell when something is weighing on his mind. And being shut out is not acceptable, especially just when he's finally ready to commit to more than friendship. When closer than usual proximity just before his trip to Central America turns up the heat between them, he takes matters into his own hands by restraining Chaz's hands-and feet-until he gets some answers.

The results are explosive and more than either could have dreamt, but the abrupt shift in their relationship is almost impossible to reconcile in the short time they have left together. It will take remarkable restraint from both to find a way to weather the separation, to stay friends…and to grow into something more.

Publisher's Note: This book was previously released as a short story by another publisher. It has been considerably expanded for release with Totally Bound Publishing.

Book one in the Grad School Guys series

Chaz glanced by unconscious habit into Justin's quiet and tidy room as he passed the open doorway, then stopped short, his gaze sharpening as something caught his eye in the dim light cast from his own room. A package lay squarely in the middle of the bed-an item that he knew for certain hadn't been there earlier today.

He walked slowly into the room, looking around. Nothing else was different. He knew this room as well as his own, and some nights, he could only get to sleep on Justin's bed. He never got under the covers-somehow it seemed less an invasion of privacy if he stayed on top of the sheets, carefully smoothing the covers back into place each morning. Chaz tried not to examine his motivations for doing this too closely, telling himself that Justin's room wasn't as uncomfortably warm as his own.

The padded envelope, which was identical to another package that had sent his heartbeat soaring two months earlier, had his name on the front- Charlie-in Justin's slanted scrawl. Justin was the only person who ever called him that, and he secretly loved that Justin called him by a special name. He could almost hear the deep, resonant, slightly scolding tone jump off the paper.

No postage or address-this had been hand-delivered…

He tore into it, needing to see. His pulse sped up as he stood rooted to the spot, staring at the shredded strips of T-shirt and the swimsuit that he knew he hadn't seen since the beach trip with Justin. Since that crazy, mixed-up night that had changed everything…