In one sentence, I would describe Until the Ice Cracks as a noir thriller set in a fictional, near future, Nordic city. Im a big fan of Raymond Chandler and I instinctively felt that type of style would work really well for a story set in Scandinavia in fifty years time. The novel is the first volume in a trilogy that in many ways pays homage to the classic, hardboiled detective story in which the uncorrupted detective has to operate within a world that is increasingly revealed as corrupt. Before I began, I posed the question – what will the world be like in 50 years? I envisaged that climate change would have pushed populations further northwards away from increasingly barren and therefore increasingly unstable countries. With fossil fuels running out, my fictional, multi-ethnic city would continue to prosper on the back of its ‘free’ geothermal power.

The flip side to this would be a desire to defend this wealth. In addition, the criminal cartels would inevitably want their slice of the pie. Technology will have inevitably moved on but things will still break down due to human neglect or error – that’s never going to go away.

My detective, Inspector Nero Cavallo, is hunting a murderous, rogue agent – the initial perpetrator. However, as the plot twists and turns it’s not easy for him to keep sight of who the real criminals are. Throughout, I was interested in exploring how honest people, along with some far less honest ones, might deal with embedded corruption.

Classic noir fiction – especially the cinematic versions – makes much of darkness with its telling accents of light. In more recent Nordic noir fiction, the landscape, like that of my city-state Eldísvík, is always bleakly beautiful. The story I’m telling takes place in winter; those long periods of physical darkness echo the moral darkness threatening the city. That may sound a bit dire, so I have kept the story fast-paced and always entertaining.

To further lighten the mood, I’ve also made the dialogue wryly humorous at times. My protagonists’ are fond of their pithy and amusing observations. Unlike the wise-cracking, unflappable Philip Marlowe, Nero Cavallo does have his moments of uncertainty just like the rest of us. I deliberately chose to keep the chapters short, that way every scene is to the point.

My fictional city, Eldísvík, is a divided one. At its centre is a thriving, multi-cultural metropolis with its ever-glowing Central Business District – whilst on the inner city’s very doorstep there is grinding poverty and beyond that ‘Red Zones’ where criminal elements go about their business unchallenged by the hard stretched police force.

As a further departure from most noir novels, I chose to tell the story from the points of view of a small cast of characters not just one – allowing the reader to experience the action through the minds of people who find themselves in very different situations. One of these is, Bruno Mastriano, a young student who is held captive by a rogue police ‘decoy’ agent who is conspiring with others to bring an end to the city’s governing regime. And then there’s this mysterious female agent herself – in essence a ruthless, fearless warrior.

Foxes are fascinating creatures – beautiful, ingenious hunters who are also the target of other hunters. In contrast to wolves, they don’t normally operate in packs. I began to wonder what would happen if scientists implanted certain wolf genes into fertilized fox embryos and that element of my story evolved from there.

Unlike the native artic fox, my red foxes are descendants of escapees from fur farms. Just like police dogs, they’ve been trained to act as back up to the undercover agents who operate in the badlands surrounding the city. When ‘off duty’ they disperse and quickly become indistinguishable from feral foxes. Hardboiled detective fiction is stalked by its deadly femme fatales – mine are accompanied by their equally deadly and beautiful, trained vixen packs. 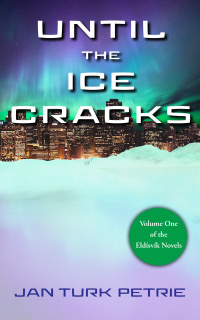 Until the Ice Cracks by Ja Turk Petrie is available now.