Zsa Zsa Gabor has been rushed to the UCLA medical centre with water in her lungs.

Zsa Zsa Gabor has been rushed to hospital with water in her lungs.

We don't expect her to get better. She will be in bed for the rest of her life.

The ailing 94-year-old screen legend - who has suffered from a string of health problems in recent months - was transported from her Beverly Hills mansion to the UCLA medial centre after showing severe pneumonia symptoms earlier this morning (04.05.11).

Her ninth husband, Prince Frederic von Anhalt, 67, is understood to be with her, as he has during her many hospital visits in recent months.

The star of stage and screen has recently struggled with an infection in her left leg, and while doctors advised she should have the limb amputated - just a month after she lost part of her right leg - she refused the operation, leaving her with just a 50-50 chance of surviving for another year.

Her husband said recently: "We don't expect her to get better. She will be in bed for the rest of her life."

Meanwhile Frederic is pressing on with his plan to have a to fulfil Zsa ZsaÃ¢â¬â ¢s "dream" of them having a child, using his sperm with the egg and womb of a surrogate mother, and on Monday (02.05.11) met with wrestler Hulk HoganÃ¢â¬â ¢s ex-wife, Pamela Bach, who is interested in helping him.

Of the baby plans, Frederic has said: "It was always my wife's dream for us to have a child, and even though we won't be using any of her eggs, she would be thrilled to know I'm going through with this. 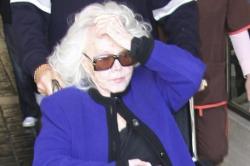