Gwyneth Paltrow has taken to Instagram to share a photo of her and Brad Falchuk's new wedding rings.

Gwyneth Paltrow has showed off her new wedding ring. 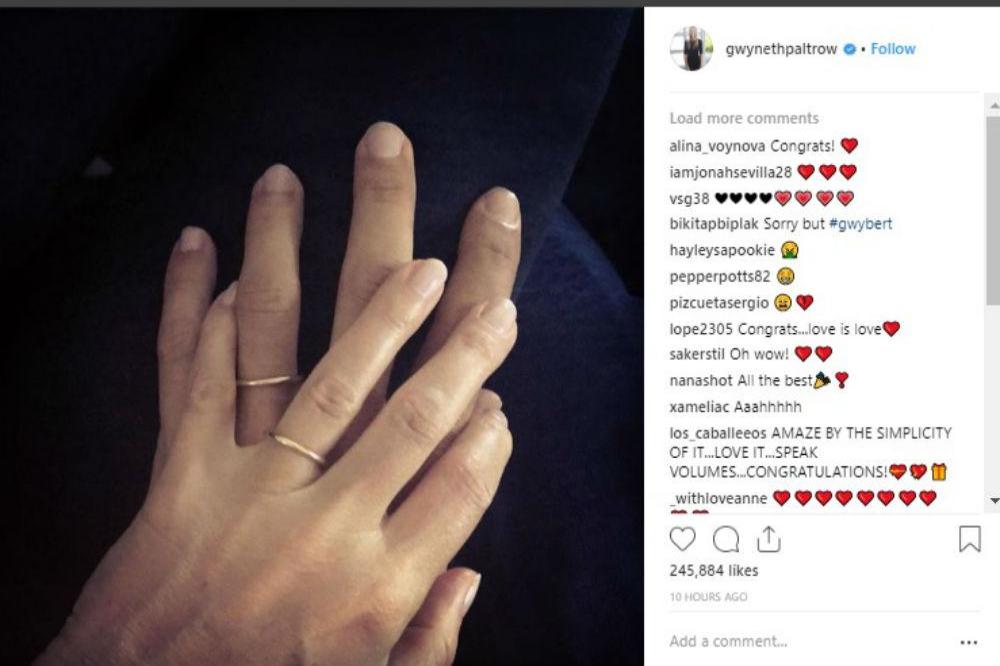 The 'Iron Man' actress tied the knot with Brad Falchuk in The Hamptons on Saturday (29.09.18) and on Sunday (30.09.18) she took to Instagram to share a photo of her hand over the producer's, revealing their matching simple gold bands.

The 46-year-old actress didn't caption the image, but she's been flooded with messages of congratulations on the post from her fans.

The couple tied the knot in front of 70 family members and close friends, and the partying went on until the early hours of the morning.

A source told RadarOnline.com: "The wedding ended at 2.30 am - Steven Spielberg, with his wife, were the first celebrity guests to leave at 1.30 am.

"A few minutes later, Jerry Seinfeld left, but his wife stayed behind. I think she stayed to party!

"Robert Downey Jr. and his wife left at 2 am. Everyone was saying Robert was definitely the coolest guest at the wedding, especially with that crazy red, black and white-checkered hat he was wearing.

"The last to leave were Cameron Diaz with Benji Madden. Cameron looked super tired. They left at 2:30 a.m. and stayed at a nearby resort."

It was no surprise Cameron was last to leave as it was previously revealed she played a big part in helping her friend - who has children Apple, 14, and Moses, 12, with first husband Chris Martin - organise her big day.

A source said: "Cameron was very excited about Gwyneth's wedding. Gwyneth has been giving her updates and asking for advice during the planning. Cameron pulled off a private wedding even though the media found out about it before. Gwyneth wanted the same privacy."

It is believed the Goop founder and her 47-year-old new husband - who has two children from his first marriage - are spending a few days in The Hamptons before jetting off on honeymoon.