Jenna Jameson: The coronavirus pandemic has been 'disastrous' for my diet

Jenna Jameson says the coronavirus pandemic has been "disastrous" for her diet, as she's been tempted to snack on unhealthy treats whilst staying at home.

Jenna Jameson says the coronavirus pandemic has been "disastrous" for her diet.

The 46-year-old star is currently following a keto diet plan which sees her swap out carbs for fat, but has said being forced to stay inside amid the global health crisis has made it difficult for her to resist the temptation to snack on unhealthy foods.

Posting on Instagram, Jenna wrote: "Super ready to get back on a healthy regimen. This whole shut down has been disastrous to my #keto lifestyle. How is everyone doing on the home front? (sic)"

But the former adult film star isn't alone in her struggle, as 'Real Housewives of Orange County' star Emily Simpson was quick to offer her support in the comments in the form of a joke about baking.

She wrote: "I've made 435 loaves of banana bread if that tells you anything (sic)"

Whilst another of Jenna's followers said: "I have put on a lot of weight from this shut down,! (sic)"

And a third added: "YOU. ARE. NOT. ALONE. My beautiful love. We r all in this together and it's been pretty hard. Don't beat yourself up about it. (sic)"

Jenna started her keto diet in December after she gained 20 lbs. when she took a brief break from the meal plan, which she previously credited with helping her shed an impressive 85 lbs.

Explaining her weight gain, she wrote on social media: "Confession. I've gained 20 pounds. Ugh. I decided to take a break from #keto and live my best carby life. The weight came back fast and furious. I know a lot of people are quitting keto because it's hard to maintain and after a year and a half I concur. Not sure if I'm going to go back full force or just calorie count. What are your thoughts? Love you guys! (sic)"

Jenna first tried the keto diet in March 2018, in an effort to lose the baby weight that stuck around after she gave birth to daughter Batel in April 2017.

Speaking about her weight loss in July 2018, Jenna - who has Batel with her partner Lior Bitton, as well as 10-year-old twins Jesse and Journey with her former husband Tito Ortiz - said: "I was lethargic and struggled with the easiest of tasks like walking in the beach sand with Batelli. I felt slow mentally and physically. I took the pic on the right for a body positive post I was going to do and decided against it because I felt anything but f***ing positive. I'm now a little under four months on the #ketodiet and it's not only given me physical results, I feel happier, smarter, and much more confident. (sic)" 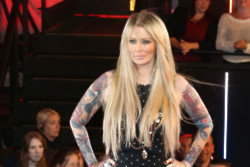